Lankford pushes to fix permitting process for all US energy production 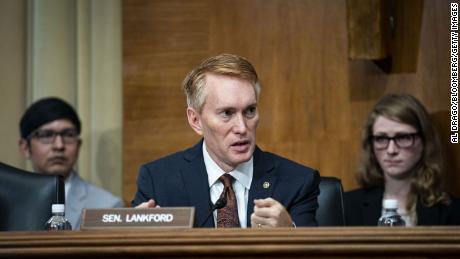 During a recent congressional hearing, Oklahoma U.S. Sen. James Lankford called for the government’s energy permitting process to be addressed and changes made.

He did so during a hearing of the Senate Energy and Natural Resources Committee which explored the topic of Federal Hydrogen Pipeline Regulatory Authorities. Lankford began his remarks saying that the permitting process as a whole needs to be addressed. Lankford focused his questions on how to address the current permitting process and how to fix it moving forward.

At a previous Energy Committee hearing, Lankford asked Canadian energy leaders how Canada’s energy permitting process compares to the lengthy and difficult process for getting energy projects approved in the US. He also asked about Biden’s first foreign policy decision to move our oil imports from Canada to Russia and eventually from Russia to OPEC.

Lankford introduced the Energy Regulations Certainty Act to prevent President Biden from issuing new US oil and gas regulations and restrictions until after Russian troops have withdrawn from Ukraine. Lankford continues to lead the Senate on how to address the problems Biden has caused for stalled US energy production, skyrocketing gas prices, and increased electricity costs. Lankford continues to express support for Ukraine amid Russian aggression and repeatedly called on the US to cut off the purchase of Russian oil and gas.

Lankford sent two letters to the President to implore him to restore America’s energy dominance and to change course on the failing energy policies that are emboldening Putin. Lankford stood up to FERC for its ongoing push to stifle and even stop US energy production because of Biden’s lock-step with climate-change extremists.

Lankford: Mr. Chairman, thank you for this hearing. Thanks for the witnesses for being here as well. I am pleased that we are actually talking about this issue because, to me, this is talking not about how can we put hydrogen into an existing permitting structure, but how do we fix the permitting structure that we have. Because whether it is a pipeline or whether it is an electricity transmission line or whatever it is we are moving, permitting has been our big issue. We have wind power coming out of Wyoming that’s started permitting in 2007, that still can’t get out with the TransWest. We have, in Massachusetts, electricity lines that can get hydropower from Canada, except they actually can’t get that. In natural gas, our problem is not a shortage of natural gas in the country, it is a shortage of pipelines actually being able to move it.

Our price issues right now with natural gas is a pipeline capacity issue more than it is anything else. So my first concern is, I don’t want us to put hydrogen and say, ‘we have such a good structure right now with permitting natural gas pipelines, let’s do it like that.’ Because that is not working very well right now. So my questions are all around how we do the permitting and how we fix this.

Mr. Zamarin, you actually tried to identify five areas, and I read through your notes on this, establishing a lead agency to coordinate federal permitting. So you’re not dealing with all kinds of different agencies that have different timelines, different rules for permitting. If you’re going to do a pipeline, you’ve got to know who’s in charge and everybody goes through that. That’s a pretty reasonable thing. Allowing the lead agency to issue the permits, allow the other agencies to consult them in the process on it. So that you kind of know who’s boss of the whole project; that is very reasonable. Establishing a timeline for a yes or no decision. You just mentioned before that it takes five years to be able to get a permit now to be able to do a natural gas pipeline. We can’t have that, people aren’t going invest long term and so having a decision timeline seems reasonable. We had the Canadian leadership in here not too long ago talking about mining and energy production in Canada. The timelines that they have set here are soon to be endless with litigation. Theirs are very fixed, and so they are more predictable in the process. Establishing, in statute, that critical infrastructure projects are deemed in the public interest. I think that is very reasonable; we need more energy. Lots of areas around the center part of the country right now are dealing with electricity availability because we do not have enough energy actually. So we’ve got to be able to have that. Revising the standard for judicial review to ensure infrastructure certificates and permits are approved unless the record lacks credible evidence to support a permit. Those are pretty reasonable changes on that. Is there anything that you want to add to that or highlight on that?

Mr. Zamarin: Thank you, Senator. I would just like to say that we are not trying to eliminate sensible regulations. We are not trying to lower the environmental threshold for us building infrastructure. We are simply trying to address the gaps that exist in the legislation that have been leveraged to stymie development. So I appreciate you going through those.

Lankford: If we don’t have enough pipeline capacity now, making it even slower to be able to get more or to say let’s do hydrogen like we are doing natural gas is not going to fix this. We are going to then bump our heads on why can’t we get hydrogen pipelines in the ground; why can’t we actually get this going. So, I do think we need to fix the whole permitting process when we address hydrogen to be able to makes sure that we are actually able to get energy done in the process.

Mr. Marsh, I do want to ask you about this as well. The timeline you would expect on a hydrogen transition, is this a couple of years or a couple of decades?

Mr. Marsh: It is a couple of decades, Senator. It is not overnight. I think that the goal is that by 2050, when you look at reports, about 20 percent of the world’s energy will come from hydrogen. And I think that it is fair to say that it can be a linear from where we are today. So, it is not an overnight transition.

Mr. Marsh: I would say this, Senator, I think the world is different than that. If I was going to design the future for 2050, it would be more things like heat pumps using electricity. I think old infrastructure will need to be changed. There is lots of work going on in the industry today, especially in Europe where I’m seeing devices that are able to take, for example, driers, which run on natural gas, and convert them to hydrogen. So, I think the technology will come for that last mile. I would think more about what they are doing in Denmark where you have over 60 gigawatts of wind power they are looking to put off shore, putting huge hydrogen pipeline dedicated just for transmission, not for homes, to provide things like fueling for vehicles and other activities. This is really for B2B to start. It is not B2Home and it will eventually migrate to B2Home as the technology progresses.

Lankford: But you assume at that point that it would be re-piping or changing from having a gas powered whatever to an electric power. So, that is a pretty dramatic transition. So we are not talking about something soon on the home consumer side that is a long way off.