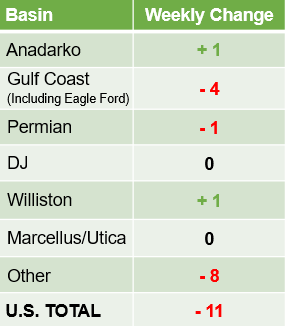 This week’s rig count released by Enverus Foundations showed an increase in drilling activity in the Anadarko Basin.

The new report indicated the gain of one rig came despite a national decline of 11 rigs, down to 861 for the week ended Jan.4.

Enverus reported the count is down 2% from the previous month but still 21% higher than a year ago.

In the last week, the Gulf Coast declined by four rigs to a total of 116, while the Permian lost one rig at 335. Both the Williston and Anadarko basins added one rig to reach 42 and 83 rigs. The Appalachian and DJ basins were flat at 56 and 19 rigs.

Compared to a year ago, EOG is running six more rigs on the first day of 2023, Conoco is nine higher, Oxy is up by 11, Mewbourne up by six and Devon up by five. Pioneer, the only pure-play among these six, is down by one rig YOY.