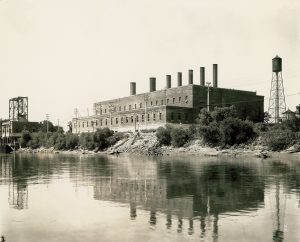 Public Service Company of Oklahoma marked the centennial of one of Tulsa’s most recognizable landmarks, Tulsa Power Station this week.

No one is certain exactly when Tulsa Power Station began producing electricity. Oklahoma Power Company began construction on TPS on the west bank of the Arkansas River in 1920. 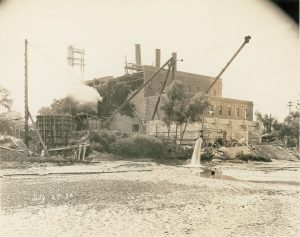 PSO purchased Oklahoma Power Company in 1927 and added the iconic 336-foot sign to the top of the TPS building that same year.

Initially, a coal-powered plant, TPS was converted to natural gas fuel near the end of World War II. It remains a vital part of PSO’s generating fleet.

“Tulsa Power Station lights up the night, a bold emblem of PSO’s service to the community,” Strahler said. “More than 100 years after opening, TPS continues to use Oklahoma resources and Oklahoma workers to deliver power to all our Oklahoma communities. TPS employees have worked hard for more than 100 years to keep PSO synonymous with dependability, and we will work together to continue that record.”