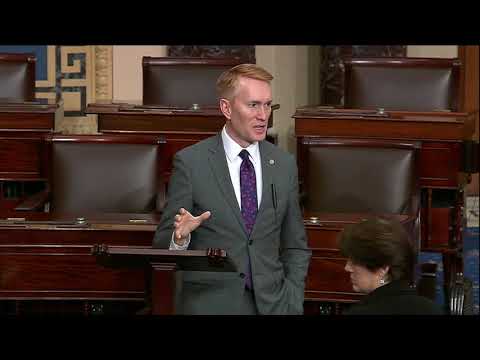 Democrats wouldn’t have anything to do with Oklahoma U.S. Sen. James Lankford’s call this week to continue the country’s current sanctions targeting Iran’s oil industry, financial sector and supporters of terrorism.

He introduced the Iran Sanctions Preservation Act to prevent President Biden from lifting sanctions on the Iranian regime.

He proposed the Senate pass by unanimous consent his Iran Sanctions Preservation Act and to outline the importance of combatting the threat posed by the Islamic Republic of Iran and provide solutions on how US policy in the Middle East can address the regime’s support of terrorism, development of ballistic missiles and unmanned aerial vehicles (UAVs), human rights violations, and nuclear proliferation.

But the Senator’s request for unanimous consent to pass his bill was blocked. His bill would require that the US maintain current sanctions targeting Iran’s oil industry, financial sector, and supporters of terrorism until Iran suspends all of its destabilizing terrorist activities. The bill would ensure sanctions remain in place until strict conditions are met by Tehran to suspend both its nuclear program and support for terrorism. The bill also expresses support for the people of Iran, who are the greatest victims of the regime’s destabilizing activities. 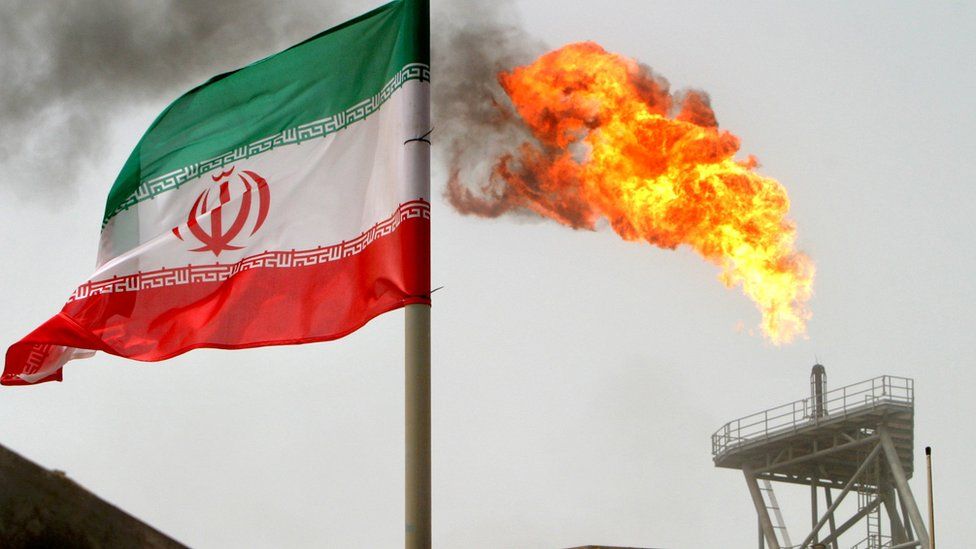 Lankford is a leading voice on countering Iran’s nuclear program and terrorist activity as he continues to strongly oppose the Joint Comprehensive Plan of Action (JCPOA). In May, Lankford spearheaded a successful amendment to block President Biden from lifting sanctions on the Islamic Revolutionary Guard Corps (IRGC) in Iran, requiring sanctions against Iranian oil exports to China.

Lankford joined Senator Joni Ernst (R-IA) and their colleagues to send a letter to the Department of Justice (DOJ) after Iranians with direct links to the country’s most prominent designated terrorist organization were detained in Argentina early last month. Lankford joined Ernst and fellow co-chairs of the Senate Abraham Accords Caucus, Senators Jacky Rosen (D-NV) and Cory Booker (D-NJ) to introduce the Deterring Enemy Forces and Enabling National Defense (DEFEND) Act to develop a strategic approach among countries included in the Abraham Accords, aimed at combatting Iranian aggression in the Middle East.

While we’re standing here right now in Washington, DC, in the middle of an afternoon, protests are happening all over Iran right now. The latest news reports coming out from social media and the very limited media that can get out of Iran, massive protests are in the streets of 20 different cities in Iran right now. The latest count is nine people have been killed in those protests by Iranian forces trying to be able to shut down the protests that are now breaking out all over the country, including, by the way, protests in Tehran. What’s going on?

This has been a simmering issue for a long time in Iran, and as I’ve stated several times on this floor and in committee hearings, our opposition with Iran is not with the Iranian people. The Iranian people live in an oppression underneath the Iranian regime, which pushes their thumb down on them and limits their progress in their world and in their own country.

The spark of this latest group of protests that are happening in the streets all over Iran is a young lady who was murdered in police custody in Iran named Mahsa Amini, a 22-year-old Iranian woman who died in custody because she broke Iran’s hijab law. In other words, she wasn’t wearing her head covering and so—brace yourself—the morality police arrested her, the morality police in Iran, detained her where she was apparently beaten to death while she was in prison.

Americans would be surprised at the number of social media posts that are getting out of Iran right now where large crowds, large crowds are gathering in cities tearing down the pictures of the Ayatollah and chanting in the streets of Tehran, ‘Death to the dictator.’

I have friends in Iran that have actually sent me some of the social media posts to be able to show me, this is what the street looks like today. This is breaking out across Iran. Now, what’s interesting is at the same time the President of Iran has been allowed to be able to come into the United States, to be at the UN General Assembly, to be able to speak out for the regime’s benefit to the rest of the world. He will be a remarkable side-by-side of what’s happening in Iran on the streets right now and the Iranian leadership at the UN General Assembly.

At this same moment as well, Iran is working with Russia and has delivered hundreds of unmanned aerial vehicles that are weaponized, little kamikaze drones, that are literally taking out Ukrainian artillery right now in the field in Ukraine, because the Iranians haven’t just supplied these weaponized drones to Russia, they’ve brought Russian leaders into Iran to be able to train them on how to be able to attack Ukraine with these weapons.

Right now as well, the Russians are calling up additional reservists to be able to fight the Ukrainians and to be able to continue to take the fight to them. Protests are also erupting in Russia right now from Russian moms that are furious that their husbands and their sons are being called up to be able to fight in Ukraine, to replace the thousands of casualties that Russia has suffered in Ukraine.

Now, why do I connect the dots on all of these? What’s happening in the streets in Russia and in Ukraine? Because at the moment of what’s happening, the United States government has partnered with Russian diplomats to negotiate with Iran a restart of the nuclear deal with them. I can’t make this up.

So the United States is using Russia as its proxy to negotiate with Iran to be able to restart a nuclear negotiation with them. Listen, the JCPOA, this nuclear deal as its commonly called, that was put in place in 2015, was then set aside to say, it is to the accomplishing its purposes.

In 2015 when it was put in place, let’s just review real quick what happened in the days after that. Plane-fulls, iteral plane-fulls with palates loaded with cash were sent to Iran as soon as this deal was signed. It was a government suddenly flush with cash. How did that regime use that cash? They bought munitions to be able to fight against Americans in Iraq.

From 2015 to 2017, that period immediate live the JCPOA was signed and plane-fulls of cash were sent to them, munitions fired against American troops in Iraq increased 341 percent. During that same time period, terrorist incidents increased 183 percent. There were 58 incidents involving Iranian vessels in the Gulf that put American troops at risk.

Iran used its money not to be able to help the Iranian people but to attack us and to attack our allies.

Our nation withdrew from this nuclear negotiation four years ago. After that happened, Iran’s exports of crude oil declined by more than two million barrels a day, cutting off a major supply of money into the regime. Iran’s defense budget was then cut 28 percent because of those revenue shortfalls. Iran’s currency lost 70 percent of its value as the pressure was applied to Iran to actually join in to nations around the world, to actually become a nation like the rest of the world.

I’m bringing a sense of the Senate today. It’s an issue that I brought multiple times. We should have ongoing dialogue with Iran. They are ambitious to become a nuclear weapons-capable nation. They are the single-largest state sponsor of terrorism in the world. They are the destabilizing force in all of the Middle East. Every nation in that entire region has to prepare themselves for an inevitable, erratic, irrational attack from Iran, and every nation fears the day that they gain a nuclear-capable weapon. With the gaps in the nuclear negotiations are large.

My amendment and my sense of the senate that I’m bringing is very clear today. One is to acknowledge what we all know is actually happening. The second is to say we cannot have any kind of sanctions relief especially preemptively in negotiation on lifting petroleum sales coming out of Iran. The next section of it, third section of it, is simply not releasing any of the sanctions on the Iranian Revolutionary Guard Corps. They are the core of the terrorist activities in the areas. They were the trainers for those that actually attacked Americans in Iraq. We should not lift sanctions on them.

The fourth on this is not providing relief to the financial institutions in Iran so that they can’t continue to extend their terrorist activities and their financial activities behind the scenes. The goal of this is to be able to put pressure on the regime but to protect the Iranian people as much as possible.

The final statement that’s in this sense of the Senate is to affirm our long-term friendship with the people of Iran and our understanding that they are living under the thumb of this regime.

My friend that I had mentioned before that is from Iran has reached out to me in the last 24 hours with this simple question: the Iran people are on the streets trying to gain their freedom, trying to be able to speak and live their faith as they choose to. And here’s his question: what are the Americans going to do to stand with us? That is a fair question for this body.

The Iranian people that are begging for their own freedom do not want the American response to be sending cash to the regime so they can oppress their people more or lifting the sanctions at this moment so that the regime can continue to advance its terrorist activities or just disengaging from its missile ambitions that destabilizes the region or to be able to continue to be able to use Russia as a proxy for the united states of America while Russia is literally using Iranian drones to attack the Ukrainians.

Let’s speak with a clear voice to the Iranian people on the streets. They want to hear the United States say we stand with your passion for freedom, not we stand with the regime and what they’re trying to do to you.