Crude in storage is unchanged at Cushing hub 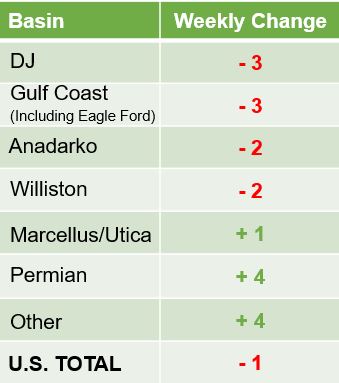 This week’s Enverus Foundation rig report showed a decline of one rig, leaving 820 active rigs in the U.S. It also revealed how active Oklahoma players are in the various shale plays around the country, including Devon Energy, Continental Resources and Chesapeake Energy.

The most active operators were Pioneer Natural Resources with an average of 25 rigs, EOG Resources with 25, ConocoPhillips with 23, Mewbourne Oil with 20, Occidental Petroleum with 18 and Devon Energy with 18. Accelerating activity the most during the quarter were Conoco with four more active rigs on average than in Q1 and ExxonMobil, also with four more rigs at 17.

The Permian had the largest increase of any play, adding 19 rigs to average 304 for the quarter with a peak of 316. The Gulf Coast average rose by 13 rigs to 101 with a peak of 118. At an average of 38 Q2 rigs, the Williston Basin was up by six compared to Q1 and had as many as 45 rigs running during the quarter.

The Anadarko, Appalachia and DJ basins notched smaller gains at two each, for Q2 averages of 67, 54 and 18, respectively. The Anadarko rose as high as 74 rigs, Appalachia peaked at 58, and the DJ had as many as 21 rigs running during the quarter.

In the Anadarko Basin, Continental Resources and Citizen Energy averaged the highest rig counts of Q2 at eight and four, respectively, while Blake Production’s two-rig increase was the basin’s biggest.

In the Permian, Pioneer outpaced its peers with an average of 25 rigs, while EOG was next in the rankings at 18. Here also, the biggest average activity increase was two rigs—by Marathon with a Q2 average of three and Exxon with 17. ConocoPhillips and EOG were the most active Gulf Coast operators, averaging four rigs each, and the biggest increase, once again just two, was by private East Texas driller Buffco Production.

In Appalachia, Chesapeake Energy’s average of five rigs and the four-rig programs of Ascent Resources Utica, EQT Corp., Range Resources and Tug Hill Operating were the region’s largest. PDC Energy’s four-rig program was the largest in the DJ Basin, while Civitas Resources was next in line with three rigs.

Finally, in the Williston Basin, Continental led the pack with six rigs—notably down by two from Q1—and Hess was next in line with three. In these three basins, no company averaged a sequential increase of more than one rig.