ONE Gas to participate in Mizuho U.S. Utility Summit 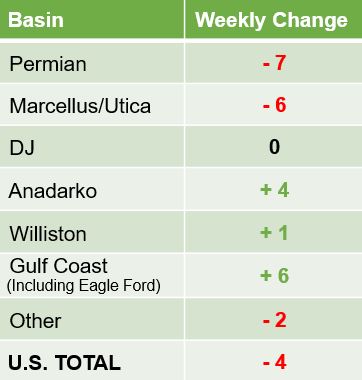 The active U.S. rig count fell by four in the last week to 656 as of Nov. 23, according to Enverus Rig Analytics. The count is up 2% over the last month and 67% in the last year.

In the Anadarko, two private operators who were inactive last week each added two rigs. Five other companies had single-rig increases, which was offset by single-rig declines from five other operators.

Eleven operators in the Permian dropped at least one rig over the last week, while only six added one rig. Endeavor Energy Resources and EOG Resources were the only two operators to drop more than one rig, with each losing two for total counts of 11 and 12, respectively. No companies added rigs in Appalachia over the last week, while five dropped rigs, including two which only had one rig active.

Chesapeake Energy was the only operator to drop more than one rig, with its total count falling from four to two.