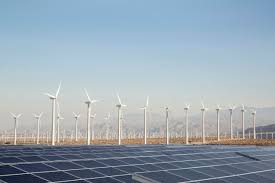 The last time the United States consumed more renewable energy than coal was in the 19th century, when hydropower was just getting started and wood burning was a major fuel source.

Now, it’s happening again, as the nation consumed more energy last year from renewable sources like solar and wind than from coal. This is the first time that has happened since before 1885 reported CNN Business news.
The milestone, announced Thursday by the US Energy Information Administration, demonstrates the dramatic shift away from coal despite President Donald Trump’s promises to prop up the industry.
America’s coal consumption collapsed by another 15% last year to its weakest level since 1964, the EIA said. The sixth-straight year of declines for coal occurred even as Trump has slashed environmental regulations and installed a former coal lobbyist to lead the EPA.
Renewable energy, by contrast, continues to boom as costs fall and climate change concerns rise. Consumption of renewable energy in the United States hit a record high last year, the fourth-straight years of growth, the EIA said.
“We are moving away from coal steadily, consistently and quickly,” said Dennis Wamsted, research analyst at the Institute for Energy Economics and Financial Analysis. “The Trump administration has been completely unable to turn around the market transition to cleaner and cheaper renewable energy.”
GE is saying goodbye to its 129-year-old light bulb business
Coal has played a dominant role in America’s energy grid going back to the 1880s. It was supplanted by natural gas, a cleaner-burning fossil fuel, in 2016, a transition caused by the abundance of cheap natural gas from the shale oil and gas revolution and tougher environmental regulations.
Now, coal faces steep competition from renewables like wind, solar, hydro and geothermal. Wind has been growing especially fast and last year power generation from wind surpassed hydro for the first time ever and is now the most popular form of renewable power generation in the United States.
It’s important to note that the EIA stats announced Thursday measure only consumption, not power generation. From that perspective, coal still leadsrenewables, at least for now.
The first time the United States generated more electricity from renewables than coal occurred in April 2019, and it’s likely to happen on annual basis for the first time in 2020, despite the disruption caused by the coronavirus pandemic.
“People want renewables. Corporations are asking for it,” Wamstead said. “They are being pushed by consumers.”
Power companies are rapidly shutting down coal-fired power plants in favor of natural gas and renewable energy under pressure from the public and shareholders. Xcel Energy (XEL) and Duke Energy (DUK), power companies that long relied on coal, have pledged to go carbon-free in the coming decades. 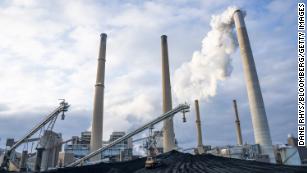 Just this week, the latest pledge came from Southern Company (SO), which gets 27% of its power from coal and 47% from natural gas, announced at its annual shareholder meeting a new target to achieve net-zero emissions by 2050.
The utility previously promised to slash greenhouse gas emissions by 50% by 2030 — a goal it now expects to hit as early as 2025.
Having promised to dump coal, power companies are facing pressure from shareholders and activists to abandon fossil fuels entirely by transitioning away from natural gas. Long seen as a bridge fuel, there are growing concerns about methane emissions and leakage caused by using natural gas.
“That’s going to be the next battle,” said Wamsted.
Source: CNN Business