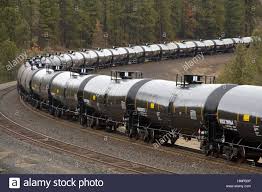 A fight over new railroad shipping rules is leading to a lawsuit to be filed by North Dakota against Washington state.

North Dakota’s battling Washington state’s new law that requires oil shipped by rail to have more of its volatile gases removed. While supporters contend it will reduce the risk of explosions and deadly derailments, North Dakota claims it will make Pacific Northwest refineries off-limits to its energy industry.

North Dakota is the nation’s No. 2 crude producer and state leaders are asking other states to join the lawsuit. The suit is expected to be filed in weeks in federal court.

Washington Gov. Jay Inslee signed the bill into law last week. It requires a lower vapor pressure limit for crude shipped by rail than the industry standard and North Dakota requires. Inslee has made climate change a focus of a 2020 Democratic presidential campaign.

Democrat Andy Billig, the Washington Senate Majority Leader who sponsored the bill, said the goal is to reduce the risk from oil being shipped by train from North Dakota’s Bakken oil patch to Pacific Northwest refineries. The volatility of oil trains drew widespread public attention following several explosive derailments, including one in 2013 in Lac-Megantic, Quebec, that killed 47 people.

“We know these trains pose a serious risk as we watch them pass through downtown Spokane in sight of Lewis and Clark High School, hospitals, medical buildings, and senior living facilities,” said Democrat Sen. Andy Billig. “This bill about safety.”

While it might be about safety in Billig’s view, in North Dakota it’s seen as a swipe at the state’s economy. An estimated 150,000 barrels of North Dakota crude, most drawn from the Bakken formation is shipped to refineries in Washington.

North Dakota’s three members of Congress last month implored Inslee to veto the bill and the North Dakota’s Industrial Commission, which regulates the oil and gas industry, said it would sue if Inslee signed it.

The Industrial Commission is comprised of the governor, agriculture commissioner and Attorney General Wayne Stenehjem. Stenehjem said his office is in the “preliminary research stages” of drafting its lawsuit but that it would be filed within weeks. He said it may argue that the Washington statute violates interstate commerce law or pre-empts federal authority.

Lowering North Dakota crude to a vapor pressure below 9 psi would require the removal of components such as butane, which is needed as an additive for winter gasoline blends so that vehicles can start in cold weather. That would devalue the product, according to the North Dakota Petroleum Council, a trade group representing about 500 energy companies.