Snow, ice and freezing rain are in Tuesday’s forecast for Oklahoma 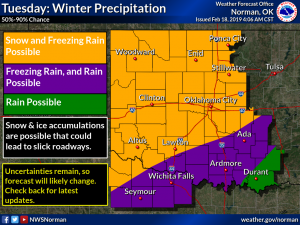 After being meanly teased last week with the 70 degree weather, Tuesday promises just the opposite in Oklahoma.  Snow, freezing rain and rain are in the forecast for a large section of the state.

That means extra layers of clothing for those who work on oil and gas rigs in the state, not to mention utility workers and many others in the state’s energy sector.

State Climatologist Gary McManus with the Oklahoma Mesonet says that means your BRAUM’S EMERGENCY BREAD AND MILK DEF-CON METER will be high.

“You know, in case you can’t go without bread and milk for at least a half-day until conditions improve,” he wrote in Monday’s weather update for the state.

Based on information from the National Weather Service in Norman, McManus says some type of ice can likely be expected across central and southern Oklahoma.

“Maybe mostly snow to the north where uninterrupted freezing air aloft is more like,” he wrote. “Areas with highest ice or snow accumulation potential get a DEF-CON LEVEL TWO. Panhandle gets a FIVE (an inch or two of snow for those folks? Please).”