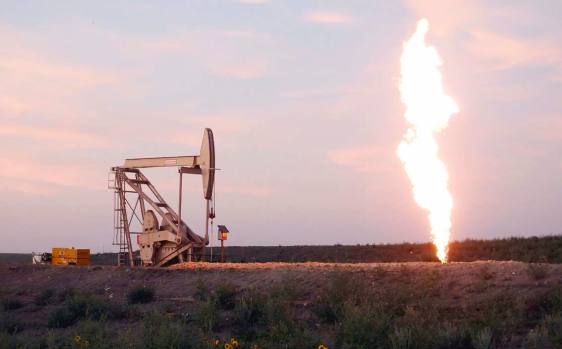 A new study of the flaring of natural gas from wells in the U.S. shows Oklahoma City-based Devon Energy is one of the firms with a low ranking of the practice.

The study, by consultants Rystad Energy, was carried out for the Environmental Defense Fund, and determined infrastructure capacity limits are the greatest ause of flaring gas that cannot be captured.

It showed five states account for 90% of the nation’s flared natural gas and despite its major oil and natural gas production, Oklahoma was not one of them.

The study reviewed 19 oil and gas firms, including Devon and found the company’s 2019 flaring intensity was only 0.8% which “would rank it as among the better performers among the independents.”

Rystad assigned a “low” flaring intensity to Devon, “reflecting progress and commitments on flaring.” It also stated that flaring monitor data based on satellite observations suggested a higher intensity of 2.5% in 2019 and 1.8% in 2020.

Rystad noted that Devon announced in June 2021, new environmental performance targets, including a flaring intensity target of an industry-leading 0.5% by2025 an total elimination of routine flaring by 2030.

“Devon is most active in New Mexico’s Delaware Basin, where midstream infrastructure constraints led to rising flaring volumes in 2017-19. However, management notes that the company took ownership of an associated midstream gas compression equipment company in 2019 and has since addressed conditions that caused much of the flaring in the Delaware Basin,” continued the Rystad study.

“These actions resulted in a decline in Delaware intensity from 4% to below 1% by the end of 2019, according to management, with flared volumes down 70% versus a year earlier in 1H20.”

The study also projected Devon might see an increase in flaring because of its 2021 completion of the merger with WPX Energy. The increase would be likely because of WPX Energy’s exposure in North Dakota’s Williston Basin where a shortage of gas infrastructure might result in high flaring intensities.