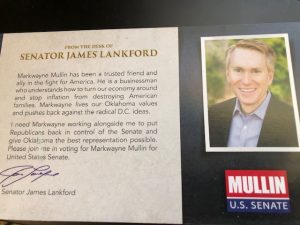 It was the last weekend before this week’s elections but Oklahoma U.S. Sen. James Lankford went fully public with his endorsement of fellow Republican Markwayne Mullin, who is running to replace retiring Sen. Jim Inhofe.

In a campaign flyer, Lankford called Mullin a “trusted friend and ally in the fight for America.”

Mullin, a U.S. Representative with a reputation for his strong support of the oil and gas industry, has a lead in most political polls.

Lankford described him as a businessman “who understands how to turn our economy around and stop inflation from destroying American families.”

The flyer concluded with Lankford’s statement: “I need Markwayne working alongside me to put Republicans back in control of the Senate and give Oklahoma the best representation possible.”