Enverus reports rig activity is steady in US 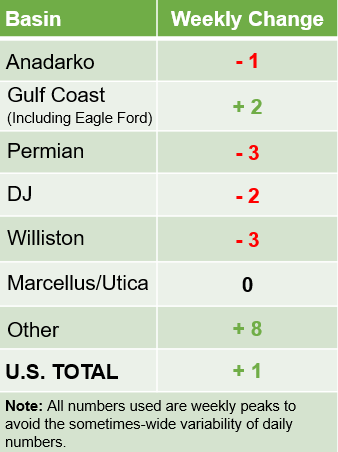 The U.S. rig count rose by one rig to 888 for the week ended Nov. 9 according to the latest count provided by Enverus.

The count is down 1% in the last month and up 31% in the last year. All numbers discussed are weekly peaks to avoid the sometimes wide variability of daily numbers.

The only major play with an increase in drilling activity last week was the Gulf Coast, where two additional rigs brought the total to 117.

Drilling down on the Gulf Coast, the most active counties are Texas’ Webb (17 rigs) and Karnes (10). In Webb County, EOG Resources is the most prolific driller with three rigs, followed by Laredo Energy, SilverBow Resources and SM Energy with two each.

In Karnes County, the most active operators are BP, Devon Energy, Ensign Natural Resources and Marathon Oil with two rigs each.