Production of Tesla’s Cybertruck to begin in 2023 in Austin 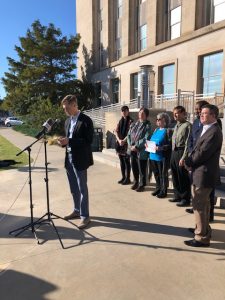 Activists who are demanding investigations into the Winter Securitization Bond efforts of 5 utilities in Oklahoma say they uncovered public records showing what they label as political corruption into how  more than $4 billion in 2021 Winter storm costs were passed through to ratepayers.

Standing outside the Oklahoma Corporation Commission headquarters Tuesday morning, the group was led by Nick Singer, founder of Oklahoma Progress Now. He used the occasion to launch an attack on state leaders including Gov. Kevin Stitt, Attorney General John O’Connor and Corporation Commissioner Todd Hiett, blaming them for rushing through a law that left ratepayers with 28 years of bond payments.

“Our investigation implicated folks at the highest levels of our government,” he told reporters. “They knew price-gouging, profiteering and market manipulation were the real problem and everyone jumped..”

But he admitted it’s unknown whether there were any criminal violations of law in the creation of the Act and how it was implemented for the utilities.

“Yeh, I think we need to look into that. If the AG won’t do anything, I absolutely think the DA should look into it. These companies made hundreds of millions of dollars. People got hit on this deal.”

Using the Open Records law, Singer obtained emails showing the state law that allowed the use of securitization bonds under the 2021 Regulated Utility Consumer Protection Act was the brainchild of Attorney General John O’Connor with the assistance of Corporation Commissioner Hiett.

However, Singer said the Attorney General’s office has yet to comply with his Open Records request while other agencies did.

“Using the Open records requests, Oklahoma Progress Now obtained never-before-seen emails, text messages and presentations showing how this happened and who was responsible,” said Singer as he stood in front of microphones.

He said every single office that “passed the buck” and stood by and did nothing, has a charge in their public documents to protect the public interest.

Singer pointed to the speed of the approval of the law—about six weeks.

“It comes down to a few companies wanted a boatload of profit,” he asserted.

He said his group’s examination of documents showed “regulators are too cozy with utilities” and that the Stitt administration “had too much concern for corporate profit.”

Del City Rep. Andy Fugate joined the news conference, saying he had his concerns about securitization when the bill was discussed on the House floor in the spring of 2021.

“In fact, I was worried more than anything else that an attorney general in the state of Oklahoma did not do their job as a consumer advocate,” he recalled, explaining he attempted to amend the bill with a requirement of the Attorney General representing consumers. It was voted down.

“Here we are today. We’re looking at ratepayers in Oklahoma effectively paying twice. And that’s a problem.” 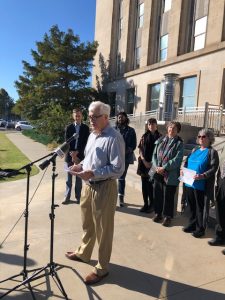 Former Rep. Mike Reynolds, who lost a State Supreme Court ruling on his constitutional challenge of the securitization law told reporters, “There’s plenty of blame to go around—I’m not here to bash the Governor.”

Instead he said the Corporation Commission, the Judicial branch, the Executive branch and the legislative branch “failed the taxpayers.” However, Reynolds put considerable blame on Commissioner Hiett, who on March 31,2021 sent a letter to the governor suggesting securitization should be used.

“I would suggest the Governor has learned it’s not good to take advice from Corporation Commissioner Todd Hiett. Hiett called it a ‘win-win’ because it not only provides savings but minimizes the financial risk to the Oklahoma utilities.”

Reynolds charged utilities were more concerned about their investors than about the ratepayers of Oklahoma.

“Two individuals appear to be at the heart of the disaster—Corporation Commissioner Todd Hiett and his apparent henchman, Brandy Wreath.”

Wreath was the Director of the Corporation Commission’s Public Utilities Division until he was named Administrator of the Commission in June of this year.

“He’s the one that manipulated the figures to convince, I guess, the governor and legislators to pass the bogus securitization Act.”

Reynolds asked that Wreath be put on administrative leave to prevent him from interfering in what he labeled “a fiasco.”

While no state agency has admitted publicly that the Winter Securitization efforts are under investigation, there are suggestions that federal agencies might be examining how the Act was made into law and used in support of the utilities.

One such federal agency might be the Securities and Exchange Commission.