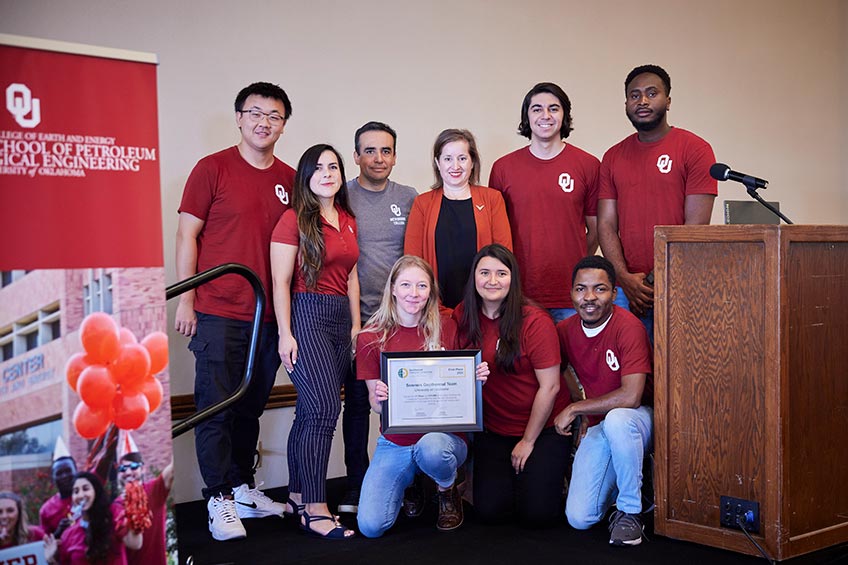 Students from a school of petroleum and geological engineering may not be obvious choices for a $10k geothermal prize—but in winning this year’s U.S. Department of Energy Geothermal Collegiate Competition, the University of Oklahoma team proved that oil and gas industry knowledge can transfer to geothermal energy development.

“Geothermal is the future,” said competition participant Cesar Vivas at a geothermal community event hosted by the winning team. “It is the only renewable that can be a baseload source of power and is not limited by seasonal factors. You can develop geothermal energy anywhere, so I recommend anyone to apply to this competition.”

The Sooners Geothermal Team from the University of Oklahoma (OU) took first place for designing a system repurposing six abandoned oil and gas wells in Shawnee, Oklahoma, to provide clean, renewable geothermal energy for more than 730,449 square feet of educational and municipal buildings, including sites within the Absentee Shawnee Tribe and Potawatomi Nation jurisdiction.

What did you learn? And where to next?

Alex Cedola: “The competition made us think outside the box and outside our comfort zone. I have learned so much about geothermal, not just within Oklahoma, but across the country and globally because it is a worldwide energy source.”

Yuxing Wu: “I am a postdoc, and the most attractive projects I work on are the renewable energy projects like this one—geothermal storage, hydrogen storage. I would like to continue renewable energy research and maybe even become a professor to have more researchers involved in this field.”

As part of the competition, the first-place team from the Mewbourne College of Earth and Energy received funding to host a community event sharing their project and the benefits of geothermal. The team’s event was held on Sept. 2, 2022, in the historic Molly Shi Boren Ballroom at the Oklahoma Memorial Union, where the team shared their passion for this project and the potential of geothermal energy.

“I just took a course here on geothermal, but the amount of knowledge that we acquired by doing the project was so much more than a course—it is a ‘hands in’ type of opportunity,” said Karelia La Marca, the team’s geophysicist.

As she enters the final year of her doctoral studies at OU, La Marca shared that her studies of geothermal are not over just because the competition has ended.

“The cool thing is that I got so interested in geothermal energy from this competition, and how we can transfer oil and gas skills, that my third and final doctoral project is going to be based on geothermal,” La Marca said.

Yuxing Wu, a postdoctoral researcher at OU responsible for modeling and economic development for the competition project, has also found inspiration through the competition.

“Next step, we want to let more people know we have this project, collect some funding, and then we want to make it real—not just on paper,” Wu said.

So how did the team react when they learned they won this year’s competition and $10,000?

“We were very proud of all the work we put into it, but we were all kind of in shock when we heard we won,” Cedola said. “We freaked out, started texting and calling each other, and our advisors and teachers found out. It was thrilling.”