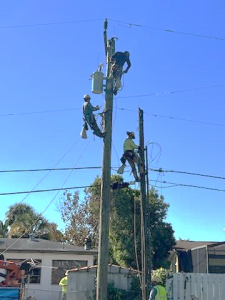 More than a week after a team of 95 OG&E linemen and support personnel deployed to Florida, crews have been working around the clock to restore power as quickly and safely as possible to areas affected by Hurricane Ian.

Since arriving, OG&E crews have been assisting Florida Power & Light – the largest power utility in Florida – and were first stationed on the east coast in Melbourne. Following the crews’ efforts, all residents in Melbourne now have their power restored.

OG&E’s current assignment is in Punta Gorda, a southwest Florida town in Charlotte County that was affected by Hurricane Ian. Since Monday, crews have been restoring power, removing dangerous obstacles and repairing electrical conductors and essential equipment. According to Florida Power and Light’s outage map, there were 125,000 Charlotte County customers initially left without power due to Hurricane Ian.

“Punta Gorda is closer to the eye of hurricane so there is more damage than the other areas. We’re seeing very large trees uprooted and the storm took down multiple poles. There is a lot of the work where we have to use specialized equipment to get to the area,” OG&E Manager of Distribution Construction and Storm Response Lead Chad Guthrie said. 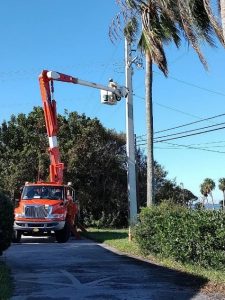 As of Tuesday afternoon, the number of customers who remain without power has been reduced to 75,000 as a result of the crew’s restoration efforts, and they’re expected to be restored by late Friday night. Guthrie said they’ve made significant strides with restoration and crews are anticipated to return home this weekend.

“We have made great progress and are working hard restoring power to many customers every day. We keep getting more work because everyone is really impressed with our work ethic and level of expertise. It’s great that we’ve been able to energize many Florida customers,” Guthrie said. “I’d like to thank the team that we brought down – each one from the leadership team to the linemen to the mechanics, it takes all of us to make this work.”

OG&E Vice President of Transmission & Distribution Operations Andrea Dennis said the outpouring of support from Oklahomans and Floridians has a great effect on the crew’s attitude as they continue to help communities impacted by the hurricane.

“OG&E’s customer service center has received countless calls from Florida residents thanking our linemen for their hard work,” Dennis said. “These words of encouragement and gratitude mean so much to our linemen, and they definitely help keep up morale as our crews continue their restoration efforts in challenging conditions.”

A Florida resident recently reached out to OG&E to express his gratitude. “My power was out for 72 hours. When a crew from OG&E arrived, they had my power restored in 15 minutes,” the resident said. “They were respectful, professional and represented the company in the best light. I’m very thankful.”