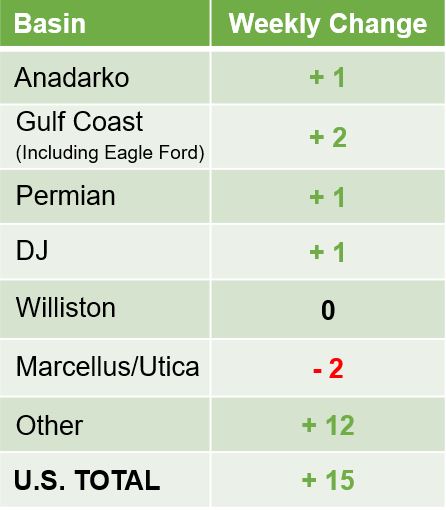 At 897 rigs running, the U.S. rig count reached its highest level in nearly three years the week ended Oct. 12, according to Enverus Foundations. There was more growth in the Anadarko Basin too.

The count rose by 15 from its highest point the previous week and was up by 4% and 38% from its weekly peaks a month ago and a year ago. All numbers discussed are weekly peaks to avoid the sometimes wide variability of daily numbers. The last time there 897 U.S. rigs operating was Oct. 18, 2019.

Three major plays hit 2022 highs in the last week: The Anadarko and DJ basins each inched up by one rig to 84 and 23, respectively, while the Gulf Coast gained two rigs to reach 119.

Meanwhile, Appalachia slid by two to 57; the Permian added one rig to hit 331, tying its previous 2022 high; and the Williston was flat at 42 rigs.