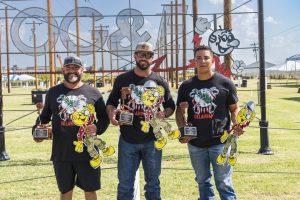 Linemen teams from across OG&E’s service area gathered in Oklahoma City on Aug. 6 to compete in the company’s annual Linemen’s Expo. This was the 31st year for the event, after a two-year pause due to health and safety concerns of COVID-19.

OG&E linemen kicked off the day with a moving salute to the American flag before showcasing their technical craft skills and commitment to safe work practices by competing in timed events like pole climbing, transformer change out, hurtman rescue, extendo stick and more.

“Congratulations to all the competitors,” said Andrea Dennis, OG&E vice president of transmission and distribution operations. “The athleticism and technical skills we witnessed among our linemen was incredible. It was an amazing day of competition with the largest turnout ever.”

The top three overall teams will go on to represent OG&E in the International Lineman’s Rodeo competition in October in Overland Park, Kansas. The winners were:

In addition, the top three winners in the Over 45, and Apprentice competitions will also represent the electric utility at the International Lineman’s Rodeo. Winners in those categories were:

Hundreds of the electric company’s employees and family members attended the event and enjoyed a variety of activities, which included a car show, grill master contest, Lineman’s Museum tours, kids rides and games, and a 5k Run & Fun Walk, in addition to the competition.