A Congressman with a desire to work together and to do more for Oklahoma’s oil and gas industry, former U.S. Rep. Bill Brewster of Marietta died Monday. He was 80.

A Democrat, Brewster was considered an active leader in energy issues, first in the state legislature and then in Congress. Before his election to the U.S. House, Brewster served 8 years in the state legislature where he chaired several legislative committees and as Chairman of several outside business organizations including the Southwest Energy Council, the Energy Committee at the National Conference of State Legislature and the Energy Committee at the American Legislative Exchange Council.

Brewster, a pharmacist by trade, served in Congress from 1991 after winning the November 1990 election, until 1997. He served on the House Ways and Means Committee where he was part of tax, energy, health care and trade legislation efforts.

Brewster also served on the House Committee on Transportation and Infrastructure during Highway Reauthorization in 1991 and 1996. After leaving the House, Brewster created Capitol Hill Consulting Group which announced his death, explaining he had been battling cancer.

The organization’s website pointed out that in 1994, Brewster formed the Congressional Oil and Gas Forum and was its first Chairman. He was also chairman of the Congressional Sportsman’s Caucus and co-founded the Blue Dog Coalition.

Brewster also was reported to be instrumental in organizing the first congressional oil and gas meeting with a sitting U.S. President. The Congressional Oil and Gas Forum included more than 80 U.S. Senators and Representatives who met with President Clinton in 1994 to discuss the concerns of the domestic oil and gas producers.

Even before Brewster was elected to Congress, his campaign was beset with tragedy. On the day of his announcement of his campaign to succeed Rep. Wes Watkins, a plan carrying two of his children, daughter Betsy Kecia and son Bradley Kent, and two family friends, crashed in southern Oklahoma. All four were killed but Brewster and his wife, Suzie, agreed to continue the campaign. 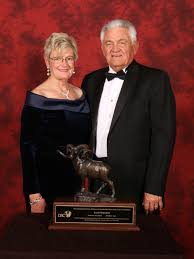 Brewster’s body will lie in state at the state Capitol on Thursday from 9 a.m. to 2 p.m.

Gov. Kevin Stitt will be joined by former U.S. Rep. Dan Boren and state Rep. Kevin Wallace in taking part in the ceremony.

Visitation will be Thursday night from 6 p.m. to 8 p.m. at the Flanagan-Watts funeral home in Marietta. The funeral will be held Friday at 1 p.m. at the Crystal Rock Cathedral in Ardmore with U.S. Sen. James Lankford presiding over the service.