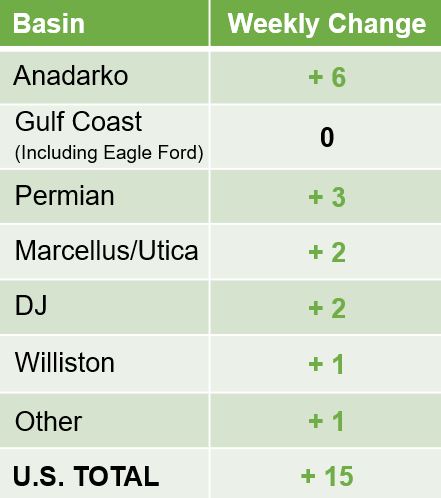 A new report by Enverus Foundations shows Oklahoma City-based Devon Energy is among the top most-active operators in the U.S.

Conoco and Exxon are both running 12 more rigs than they were a year ago, while EOG has nine more running. Mewbourne has three additional rigs, while Devon is up two. Pioneer’s drilling program has actually decreased by one rig from a year ago.

Based on weekly peak figures, the U.S. rig count fell by six to 852 during the week ended Sept. 14, according to Enverus Foundations data.

The count is flat in the last month and up 37% YOY. All numbers discussed are weekly peaks to avoid the sometimes wide variability of daily numbers.
The majority of declines occurred outside of major basins. In major plays, Appalachia slid by one rig to a total of 57, while the Anadarko Basin and DJ Basin were flat at 77 and 22 rigs. The Permian notched a one-rig increase to 318, while the Gulf Coast and Williston Basin added two rigs each at 117 and 43.