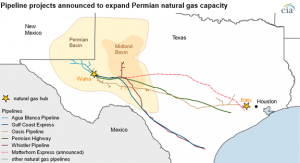 The U.S. Energy Information Administration issued its latest Natural Gas Pipeline Project Tracker on Thursday to include five new projects—four newly announced projects and one project under construction—since its last update in April 2022.

Of the four new projects, three will expand capacity for existing pipelines and one will be a new pipeline. If completed as planned, these five projects together would increase takeaway capacity out of the Permian Basin by a combined 4.18 billion cubic feet per day (Bcf/d) over the next two years.

The three capacity expansion projects were announced in May and June:

There are some Oklahoma ties to the new Permian pipeline project which reached a final investment decision on May 19:

The project already under construction is expected to be completed by the end of 2022: