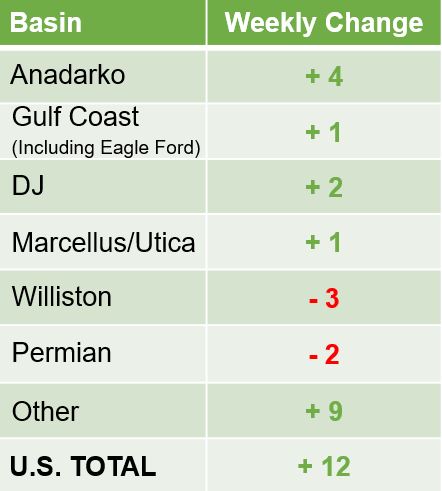 A weekly rig report by Enverus showed a slight decline nationally while the Anadarko Basin not only hit a 2k022 high but its highest activity level in nearly three years.

The Anadarko Basin was up by one in the past week to reach 76 active rigs in Oklahoma and parts of Texas where the Basin is located.

Oklahoma City-based Continental Resources was also the most active exploration company in the Permian Basin.

Nationally, the count stood at 852 drilling rigs in the week that ended Aug. 24 according to Enverus Foundations data. The count was down by three from the high point of the previous week.

That count was up 1% from a month earlier and up 45% YOY. All numbers discussed are weekly peaks to avoid the sometimes wide variability of daily numbers.

Major plays with weekly increases were the DJ Basin, up by two to reach 21.

The most active operators were Continental Resources with six rigs, Citizen Energy with five and Mewbourne Oil with four.
The rig count fell by two in the Williston Basin during the last week to a peak of 43, and the Permian count fell by one to 322. Activity was flat week over week in the Gulf Coast at 113 rigs.