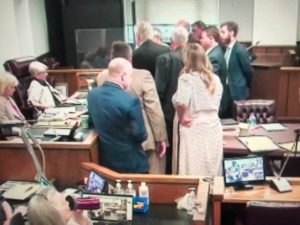 If consumers interested in the $163.5 million rate hike sought by Oklahoma Gas and Electric thought a Corporation Commission judge’s hearing Monday would be brief, they were wrong.

Administrative Law Judge Linda Foreman spent the entire day listening to testimony and detailed questions by attorneys not only representing OG&E but numerous other groups, some who reached a settlement to lower the rate hike to $45 million and others opposed to it in the entirety.

What complicated matters was the rare development of two Joint Stipulations and Settlement Agreements involving the company’s move to raise rates. One was filed by OG&E and another was filed by a handful of groups opposed to the rate hike.

“It is still not a done deal,” stated Judge Foreman, a statement she also made a month ago in a previous hearing. The judge also explained she would make a recommendation to the Corporation Commission and any final decision would come from the three commissioners.

She allowed public comment to be heard first before listening to the covey of attorneys gathered in front of her. The Rev. Tim Luschen of the St. Charles Borromeo Catholic Church and a representative of the consumer organization VOICE spoke in opposition to any OG&E rate hike.

“It’s not a good time as OG&E is paying dividends to its stockholders,” explained the priest who said his church is already $6,000 over on its utility budget at the end of its fiscal year.

Soon, OG&E’s attorney explained the utility had filed a motion to strike an alternate Joint Stipulation and Settlement Agreement filed by the AARP, one which called for no rate hike for the utility. At that point, attorneys huddled for nearly 15 minutes in an off-the-record discussion with the ALJ, all standing before the bench, some listening to the main discussion and others participating and offering their comments.

What came out of the huddle was an agreement by which OG&E would consider the AARP filing to be a Joint Response rather than a Joint Stipulation to the rate hike request. This allowed Judge Foreman to proceed and consider only one Joint Stipulation.

The opposing Joint Stipulation had originally been filed by the AARP, the Oklahoma Industrial Energy Consumers, Walmart Inc., the Oklahoma Association of Electric Cooperatives and the Petroleum Alliance of Oklahoma.

The day proceeded with witnesses who faced a long morning and afternoon of questions from OG&E as well as groups opposed to the rate hike.  Under OG&E’s Joint Stipulation and Settlement Agreement, the $163.5 million rate hike would be reduced by 73% to $45 million, a move that would be an additional $3 a month for an average residential consumer.

Donald Rowlett, Managing Director of Regulatory Affairs for OG&E said under intense questioning he considered the reduction “fair and reasonable” and said it came as a result of “very robust discussions” and negotiations with the involved parties.

In discussing how OG&E reached the settlement with the Attorney General, the Public Utilities Division of the Corporation Commission, the Oklahoma Sustainability Network, OGE Shareholders, the Sierra Club and CNC Steel, Rowlett explained the negotiations started in person and eventually moved to smaller groups to reach the settlement.

He claimed the settlement would result in benefits for customers and that the utility had already made “significant reductions in outages” in certain circuits maintained by OG&E. 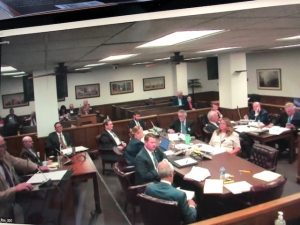 Witnesses spent much of the day answering detailed and intricate questions about the different aspects of the proposed rate hike settlement.

Corporation Commissioners Dana Murphy and Todd Hiett attended the hearing during the morning and asked only a few questions. Hiett sat in on the afternoon session.

Judge Foreman recessed for the day at 5 p.m. and said the hearing would continue Tuesday at 10 a.m.