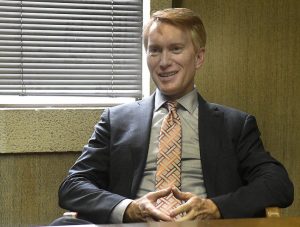 U.S. Sen. James Lankford, R-Okla., called for an end to tax credits for the wind industry during a visit to the Enid News & Eagle Tuesday afternoon.

Lankford expressed support for wind energy, but said the time has come to remove production tax credits for the industry.

“I don’t have a problem with wind energy,” Lankford said. “It’s one of many good sources of energy we have.”

But, he added, “wind is profitable on its own.”

Lankford said the industry’s success is it’s own argument for ending tax credits.