Work started three weeks ago on the $1.1 billion vehicle assembly plant that could become Tesla’s largest ever. The California-based company has only one other plant in the U.S. and three others around the globe reported the Austin American-Statesman.

“Tesla is still a pretty young company” despite its high public profile and what has been a skyrocketing stock price this year, Whiston said. “They have to ramp up production.”

The Austin-area factory, to be located on a 2,100-acre tract in southeastern Travis County at Texas 130 and Harold Green Road, will serve consumer demand in the eastern and central portions of the country for Tesla’s Model 3 compact sedan, which has become its top seller, and for its recently introduced Model Y compact sport utility vehicle.

But the plant also will be the launching point for two new Tesla products — the company’s planned Cybertruck pickup and its commercial semi-truck for long-haul shipping. Some analysts expect Tesla to use the Austin plant to manufacture batteries as well.

The Cybertruck in particular will be closely watched as the company tries to break into a U.S. market for pickups dominated by Ford, General Motors and Fiat Chrysler, the so-called Big Three automakers. 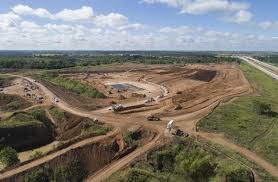 ‒ California: The company has an assembly plant in Fremont, as well as a number of smaller manufacturing facilities that also are in the Bay Area. About 70% of Tesla’s vehicles currently are produced there.

‒ China: Tesla opened an assembly plant in Shanghai late last year that currently produces about 30% of its vehicles.

‒ Germany: Tesla broke ground on an assembly plant near Berlin earlier this year. The factory is expected to be up and running next year.

‒ Texas: Work began on the planned assembly plant just outside Austin in southeastern Travis County about three weeks ago. Tesla hasn’t provided a precise date for when it will be finished, although CEO Elon Musk has said he would like it to be ready sometime next year.

‒ Nevada: Tesla has a large factory in Storey County near Reno that produces batteries.

‒ New York: The company makes solar panels at a factory in Buffalo for installation on building roofs.

Tesla’s pickup — which has an unconventional, sci-fi appearance and a base starting price of $39,900 — was unveiled last fall, but it won’t go into production until the Austin factory is operational.

Tesla CEO Elon Musk said he hopes to have the factory running and the Cybertruck in production by late next year.

“I just wanted to make a futuristic battle tank — something that looks like it could have come out of ‘Blade Runner’ or ‘Aliens’ or something like that, but that is also highly functional” as a pickup, said Musk, speaking about the Cybertruck during a recent podcast interview with Automotive News.

“Let me tell you, the truck you want in the apocalypse is a Cybertruck,” he quipped during the interview, saying that the vehicle’s body panels, which are unpainted and stainless steel, are “bulletproof to a handgun.”

If the unusual appearance of the Cybertruck doesn’t go over well with consumers, however, Musk said Tesla will simply default to making a pickup with a more conventional look. But he’s not anticipating that will happen, saying the company already has received several hundred thousand advance orders, and there’s “more excitement about the Cybertruck than any product we have ever unveiled.”

Either way, boosting production overall is key to Tesla’s goal of taking on traditional automakers by making its electric vehicles more accessible to mainstream consumers.

Tesla has said it’s aiming to deliver a total of about 500,000 vehicles this year — 36% more than in 2019 despite disruptions related to the coronavirus pandemic.

But the figure still constitutes just a small slice of global new vehicle sales for the auto industry, meaning the company potentially has plenty of room to keep growing by increasing output. Ford, for instance, sold about 5.4 million vehicles worldwide last year, while Fiat Chrysler sold about 4.5 million.

“The addressable market is big for Tesla,” said Jefferies analyst Philippe Houchois. “It’s not designed to be a premium, high-priced brand — they want to make affordable cars. Given the size of that market, (Tesla has) a need for more capacity” to raise production.

Investors already are on board, however. Tesla shares, trading recently at about $1,430 each, have more than tripled this year, giving the company a stock market value that tops $265 billion and far outpaces that of any other automaker.

The gains are partially the result of improving financial performance, with Tesla recently reporting $104 million in net income in the second quarter on about $6 billion in revenue — capping four consecutive profitable quarters for the first time in the company’s 17-year history.

But high hopes for Tesla’s cutting-edge automotive and energy-related technology have been a driver of the investor enthusiasm as well, according to analysts, as has the mystique surrounding Musk, who also heads aerospace company SpaceX.

“It’s the technology and the potential,” said Morningstar’s Whiston, who considers Tesla shares overvalued. “What (Musk) can do long-term, people think is going to be so amazing and revolutionary that people think (Tesla) is worth more than Toyota now,” which has a market value of about $180 billion.

In the near term, however, Tesla still faces the task of proving it can grow into a much bigger automaker able to compete with the traditional industry heavyweights.

That’s where the new Austin factory comes in. Musk has declined to estimate how many vehicles it’s likely to produce annually — saying only “a lot” when asked on the company’s recent second-quarter conference call.

“We will be creating a massive factory and Cybertruck and semi programs in Texas,” Musk said on the conference call.

Initial construction work on the factory, which will employ 5,000 people within about four years, began three weeks ago, according to Musk. Tesla already lists a number of job openings related to the project on its corporate website.

As things stand, about 70% of Tesla’s vehicles are produced at its manufacturing facilities in Fremont, Calif., and about 30% are produced at a factory in China that it opened late last year. In addition to the planned Austin factory, a Tesla assembly plant in Germany is under construction.

Musk said recently that the Austin-area assembly plant should be sufficient to serve Tesla’s U.S. production needs for the next four to five years, after which the company is likely to look for a site to build a third factory in the country, probably closer to the Northeast.

Travis County and the Del Valle school district helped lure the planned factory here by approving tax breaks sought by Tesla that are valued at a minimum of about $60 million combined. But Musk indicated in his recent comments to Automotive News that the company didn’t really need much prodding to make the choice.

“When talking to key members of the (Tesla) team that would need to move to Austin from California in order to get the factory going, Austin was their top pick, to be totally frank,” Musk said.

“I guess a lot of people from California, if you ask them what is the one place you would move outside of California, it’s Austin,” he said. “That was a big factor, because I just went around the room with the team and said where do you want to spend time, you know, and where would you potentially move? And they were like, well, Austin was just the number one choice.”