More than 40 wells reported completed by Chisholm Oil and Gas 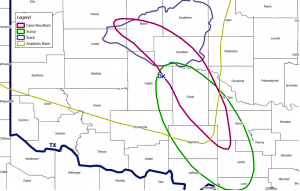 Oklahoma’s SCOOP is seeing increased exploration as a handful of companies won permits to drill in the past week from state regulators.

Two permits were for the McClanahan-Martin #4 wells to be drilled at 36 1S 5W which is a site about 4 miles southwest of Velma. Two more permits for the Corsbie Unit #7 and #3 wells will allow drilling at adjacent sites at 25 1S 5W.

Newfield Exploration Mid-Con Inc., which typically is busy in the STACK play has a permit in Garvin County where it will drill 3 sister Sandra #304 wells at 21 3N 4W. The site is about 7 miles south of Lindsay.

But Newfield hasn’t forgotten the STACK play. It obtained permits for two Klade #1407 wells to be drilled at 10 14N 7W which is a few miles southeast of Okarche in Canadian County.

Newfield also has a permit to drill the Yost #1608 6H-18x well at 19 16N 8W in Kingfisher County. The site is about 8 miles west of the city of Kingfisher where Newfield has seen a lot of success.

Continental Resources has plans to drill in the eastern part of the SCOOP play. It has a permit for the Essex #1-12-13-24 xhw well to be drilled at 12 2S 3W which is about 4 miles southeast of Ratliff City.

Having had some recent big wells in northwestern Oklahoma City, Revolution Resources Inc. is trying again. It obtained a permit for the Greyworm 1404 27-22#1BH well to be drilled at 27 14N 4W which is a site just north of NW 178th street in the city.

Western Oklahoma is where Presidio Petroleum continues drilling efforts. It has a permit for the Yoxsimer #3-15 well to be drilled in Roger Mills County at 15 15N 22W which is a site several miles southwest of Leedey.