Inhofe and others wrestle with PFAS contamination issue 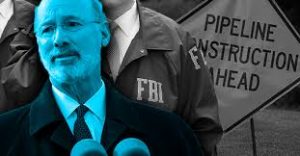 The FBI has begun a corruption investigation into how Gov. Tom Wolf’s administration came to issue permits for construction on a multibillion-dollar pipeline project to carry highly volatile natural gas liquids across Pennsylvania, The Associated Press has learned.

FBI agents have interviewed current or former state employees in recent weeks about the Mariner East project and the construction permits, according to three people who have direct knowledge of the agents’ line of questioning.

All three spoke on condition of anonymity because they said they could not speak publicly about the investigation.

The Mariner East pipelines are owned by Texas-based Energy Transfer LP, a multibillion-dollar firm that owns sprawling interests in oil and gas pipelines and storage and processing facilities. At a price tag of nearly $3 billion, it is one of the largest construction projects, if not the largest, in Pennsylvania history.

However, the construction has spurred millions of dollars in fines, several temporary shutdown orders, lawsuits, protests and investigations. When construction permits were approved in 2017, environmental advocacy groups accused Wolf’s administration of pushing through incomplete permits that violated the law.

An Energy Transfer spokeswoman said the company had not been contacted by the FBI about the Mariner East.

The Mariner East project, along with the overhaul of the Marcus Hook refinery and export terminal near Philadelphia, have had the support of leading public officials and business trade groups.

Wolf himself has said that the pipeline’s economic benefits would outweigh the potential environmental harm, and that the Mariner East would be part of a distribution system that the industry needed.