Flooding will keep barge traffic down at Tulsa Port of Catoosa

Strong quake hit NW Kansas and was felt in Oklahoma 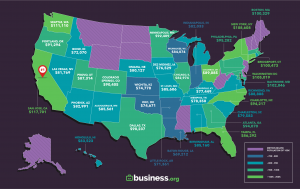 A survey indicates the average tech worker in Oklahoma City is paid nearly $75,000 a year while those in Dallas make more than $98,000 annually.

The survey was conducted by Business.org which found Oklahoma City’s average Tech salary is $74,671 compared to $74,778 in Wichita, Kansas and $98,237 in Dallas,Texas.

Tech workers in Tulsa make an average of $73,904 which was less than one-half percent better than 2017 figures.

The business website said tech workers in Colorado Springs make an average of 490,405 while those in Albuquerque, New Mexico draw $85,561.

Here’s how Business.org reported its findings:

At Business.org, we produced this same report for 2018, but we wanted to revisit and update our findings to give you the most accurate information for 2019. To choose our top cities, we looked at 100 metro areas across the US and pulled the most recent available data (primarily from the Bureau of Labor Statistics) on their tech salaries. We compared the average salaries in each metro, and voilà: our list was born.