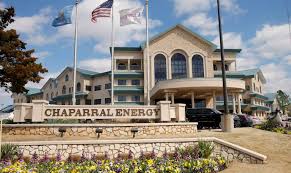 Oklahoma City’s Chaparral Energy, Inc. reported a 52% increase in its STACK production in 2018 compared to the previous year. It totaled 14.5 thousand barrels of oil equivalent a day.

The company’s fourth quarter net income was $79 million or $1.73 per share. The adjusted EBITDA for the quarter was flat on a quarter-over-quarter basis at $34.4 million.

Chaparral invested nearly $195 million in its STACK drilling and completion operations in 2018 and increased its STACK proved reserves by 50% compared to 2017. It also replaced 519% of the STACK production.

As it also worked on saving money, Chaparral managed to cut total company lease operating expense per barrel of oil equivalent from nearly $11 in 2017 to $7.24 last year.

“Our team is extremely proud of all we accomplished in 2018,” said Chief Executive Officer Earl Reynolds. “From strategically adding to our STACK acreage position to uplisting to the New York Stock Exchange to successfully completing a $300 million senior notes offering and increasing our borrowing base, we were able to increase the value of our assets while also strengthening our balance sheet.”

He went on to state the company intends to invest nearly $300 million in capital and more than 80% will be dedicated to low-cost, high-return STACK/Merge D and C activity.

“This focus will continue to drive our efforts as we move toward partial and full section development, with additional spacing tests throughout the first half of 2019 across Canadian and Kingfisher counties,” added Reynolds.