OGE crews to respond to Hurricane Florence in North Carolina 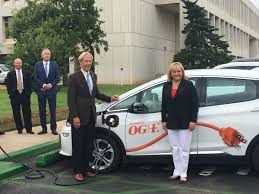 Oklahoma’s State Capitol has its first ever electric-car charging station.

It was formally opened to the public during a Monday morning ceremony featuring Gov. Mary Fallin and leaders of the Oklahoma Department of Transportation.

The governor was mildly surprised how many hybrid and electric cars are on the market, something she learned during a weekend shopping excursion for a new car.

“I went and looked at cars this weekend,” she told News 9 TV, “and it was incredible how many hybrid cars, electric cars that we already have on the marketplace, especially in 2019.”

She also took her first ride in a Tesla owned by David Glover who is one of about 2,000 electric car owners in Oklahoma.

“Most people have this belief that they need a full tank of gas to go 400 miles every day,” he says, “but they’re only going 30 or 40 miles a day, so almost everybody could change to an electric car and be fine.”

The state capitol charging station will appear on maps and state leaders hope it might draw tourists and travelers to the capitol.

Business owners at Spiers New Technologies, Pelco Industries and Patco Electric contributed to finance the charging station. The advancement of electric cars has the interest of the man in charge of the Oklahoma Department of Transportation.

“There’s no large formalized plan yet, but as we begin to look at replacing our current fleet, we are going to look at electric,” said Mike Patterson, Executive Director of ODOT.

An Oklahoma bill to tax electric car owners failed last year by missing the deadline. Governor Fallin says she still hopes her successor would consider supporting a similar measure in the future because it would allow for the installation of more charging stations statewide.