No Letup in Drilling Interest in STACK and SCOOP 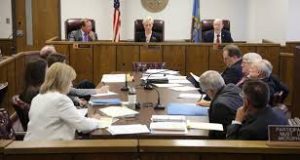 The latest drilling permits issued by the Oklahoma Corporation Commission revealing extensive drilling interest in several counties including eleven permits granted for Blaine County, one of three counties that make up the STACK play. Eleven were also granted to companies drilling in Kingfisher County, another of the STACK counties.

As shown in the Permits to Drill portion of OK Energy Today, five of the Blaine County permits went to Continental Resources while three were issued to Devon Energy. Single permits were granted to Marathon Oil, Overflow Energy and Triumph Energy Partners.

Nine permits were granted for drilling in Stephens County. Nine went to Marathon Oil and others to Newfield Exploration and Banner Oil and Gas.

Nine were also granted for operators in Grady County, one of those in the SCOOP.