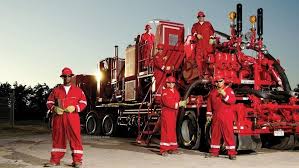 Even with total fourth quarter 2016 revenue of $4 billion, Houston-based Halliburton Company reported a loss of $149 million from continuing operations. That figured to be $0.17 per diluted share while adjusted income from the same operations was $35 million or $0.04 per diluted share.

It compares to third quarter continuing operations income of $6 million.

Total fourth quarter revenue was $4 billion, an increase of 5 percent from the $3.8 billion reported in the third quarter 2016.“As reported diluted weighted average common shares outstanding.”

The company’s total revenue for all of 2016 came to $15.9 billion, a drop of $7.7 billion or 33% from 2015. The reported operating loss for the year was $6.8 billion compared to the reported operating loss of $165 million for 2015. It’s reflected in the scaled-down operations at Halliburton’s former company headquarters in Duncan, the county seat of Stephens County which has one of the highest jobless rates in the state.

Commenting on 2016 results, Dave Lesar, Chairman and CEO said, “Despite the turbulent year for the energy industry, I am very pleased with our 2016 results. They show that we have executed in a challenging market.

“I am pleased to announce that we returned to operating profitability in North America this quarter, and achieved 65% incremental margins,” added Lesar.

“Despite the positive sentiment surrounding the North American land market, it is important to remember that our world is still a tale of two cycles. The North America market appears to have rounded the corner, but the international downward cycle is still playing out.