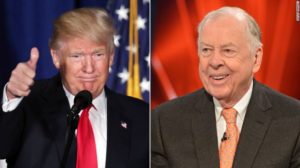 “A complete loser for energy”  T-Boone Pickens on President Obama

It’s what he said in a recent interview with Yahoo Finance.

“There’s no question Donald Trump will be a better candidate for energy,” responded Pickens when asked about the Presidential race. Pickens, a native Oklahoman who has contributed tens of millions of dollars to Oklahoma State University’s football program, was quick to outline a disaster if HIllary Clinton were elected and followed through on her vow to stop fracking.

And when asked about President Obama.

“He’s been a complete loser for energy. He has never promoted energy and never pays attention to it that I can see.”