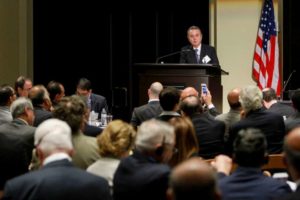 The huge shale oil fields in Mexico could be open to U.S. drillers as early as March 2017, according to Mexico’s energy secretary Pedro Joaquin Coldwell. It’s what he told energy executives, attorneys and academics last week at Rice University saying the auctions for the northern Mexico shale fields will be part of his country’s sweeping reform of its government-run energy sector.

“We thought industry wouldn’t be interested,” explained Coldwell, who added that in recent months companies have asked Mexico to restart the shale auction.

He said environmental regulations should be ready by March and bids will be taken shortly afterward.

The energy reforms were passed by Mexican politicians three years after oil and gas prices plummeted and electricity rates soared. It was more than 70 years ago when the country gave the boot to foreign oil drillers and nationalized its energy industry.