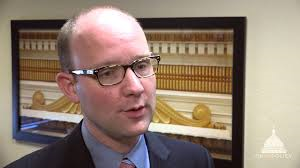 While Oklahoma wrestles with the continuing earthquakes that some scientists believe are a direct link to wastewater injection wells, Oklahoma State House Democratic leader Scott Inman proposes a ban on out-of-state wastewater.

It’s what he told News 9’s Justin Dougherty in a recent interview.

“I think the state should be looking into whether or not we want to continue to allow that water to come into the state and let it be re-injected into our wells,” said Rep. Inman.

He calls on a broader perspective in attacking the earthquake problem and the thousands of disposal wells that exist in Oklahoma. At least two percent of the wastewater injected into those wells last year in the state came from surrounding states and Rep. Inman says the practice should end.

“We don’t have to hinder the industry but we also don’t want to have houses crumble around our citizens,” he said.

The Oklahoma Corporation Commission had considered such a move but was told by legal advisors that stopping the transport of wastewater into Oklahoma would violate a federal law.