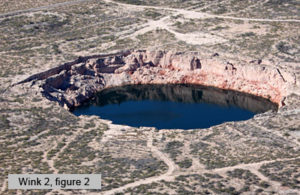 A new study by geophysicists at Southern Methodist University in Dallas shows two giant sinkholes near the small West Texas towns of Wink and Kermit have grown unstable and could increase in size.

The sinkholes are a mile apart and satellite radar indicates they appear to be expanding and according to the researchers, might even develop into one massive sinkhole.

“This area is heavily populated with oil and gas production equipment and installations, hazardous liquid pipelines as well as two communities,” said Jin-Woo Kim, a research scientist at the Roy M. Huffington Department of Earth Sciences at SMU. “The intrusion of freshwater to underground can dissolve the interbedded salt layers and accelerate the sinkhole collapse. A collapse could be catastrophic.”

The prospects of a catastrophic sinkhole has SMU researchers paying closer attention to the developments through the use of satellites. The satellite radar remote sensing reveals not only the instability of he massive sinkholes but also of the ground around them that appears to be subsiding.

Joining Kim in the study is Zhong Lu, professor and Shuler-Foscue Chair in the same department at SMU. They are collecting more high-resolution satellite data over the sinkholes and neighboring regions to monitor further development and collapse.

The sinkholes were caused by the oil and gas extraction that peaked from 1926 to 1964. Wink Sink No. 1 opened in 1980 and Wink Sink No. 2 opened in 2002. A salt bed is underneath the area, part of the oil-rich Permian Basin and it concerns the scientists that it is dissolving with changing groundwater levels.

They found a connection between groundwater level in the underlying Ogallala Aquifer and further sinking of the surface area in the summer months. When the groundwater rises, it speeds the dissolving of the underground salt which causes the ground surface to subside.

Wink Sink No. 1 continues to expand and is about three-tenths of a mile wide. Wink Sink No. 2 is closer to the town of Wink and is the larger of the two, measuring 900 feet across at one point.

The scientists say not just the sinkholes are slowly collapsing more, but so is adjacent land. Some land nearly seven-tenths of a mile from Wink Sink No. 2 has been dropping at a rate of more than 5 inches a year. One area sank nearly 2 inches in just four months.