Another step taken in Chesapeake’s acquisition of Vine Energy 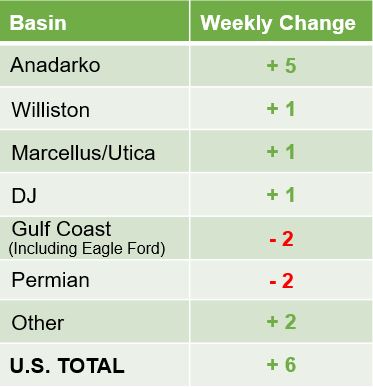 Oklahoma’s Grady County is in the top 20 most active counties for oil and gas drilling in the U.S. according to Enverus Rig Analytics which also released its rig count this week.

The Texas firm said its numbers showed 11 active rigs in Grady County in the Anadarko Basin. The Basin also saw its total rig count increase by 5 to reach a total of 48 rigs.

Enverus stated that the largest change over the last month was a five-rig increase in the Williston Basin to reach 27. Both plays hit daily 2021 highs in the last week: 50 rigs in the Anadarko and 28 in Williston.

Of the 20 most active counties, parishes and Gulf of Mexico areas, 50% are in the Permian, led by Lea County, New Mexico, at 44 rigs. Three Haynesville jurisdictions rank in the top 20—DeSoto Parish, Louisiana, with 10 rigs; Panola County, Texas, with eight; and Bossier Parish with seven.

Also in the top 20 were Converse County, Wyoming, in the Powder River Basin, with nine; the Mississippi Canyon area of the GOM with nine; Williams and McKenzie counties, North Dakota, in the Williston Basin with seven each; Weld County, Colorado, in the DJ Basin with seven; and Karnes County, Texas, in the Eagle Ford with six.

The number of rigs running in the U.S. rose by six in the last week to a total of 593 as of Sept. 1, according to Enverus Rig Analytics. The count is up 2% month over month and up 115% YOY.