What an environmentalist says Oklahoma should do to avoid power outages

Latest quake in Oklahoma resulted in no regulatory action 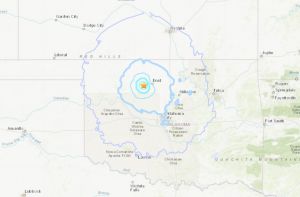 While dozens of Oklahomans felt a Sunday afternoon earthquake measuring 3.7 magnitude in the northern part of the state, it wasn’t strong enough to warrant any disposal well curtailment by state regulators.

The epicenter of the quake was 2 miles southeast of the town of Meno which is near Enid. By Monday morning, at least 55 people had reported feeling the quake including some in Stillwater, Norman and Oklahoma City.

“It was reviewed, but there wasn’t anything found that warranted action by ISD.,” stated Matt Skinner, a spokesman for the Oklahoma Corporation Commission. The action was reviewed by the agency’s Induced Seismicity Department.

In recent weeks, northern Oklahoma experienced stronger quakes including a 4.2 magnitude quake on Friday, Feb. 19 near Manchester. It was strong enough that people 270 miles away in Kansas City felt the shaking.

In early February, a swarm of quakes around Enid and Covington resulted in regulators ordering some disposal wells to cease or reduce operations.

“Researchers are in broad agreement that disposal into the Arbuckle formation in parts of Oklahoma can raise risk of induced seismicity,” said a spokesman at the time.