Oil prices drop below $60 in US trading 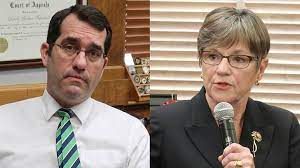 The natural gas bills that are hitting Kansas consumers and businesses because of the February winter storm prompted at least one to file a price gouging complaint with the state’s governor who responded by asking the attorney general to investigate.

So Gov Kelly sent a letter to the attorney general asking for an investigation and also a public information campaign about the natural gas price gouging. Schmidt told the governor he already had an investigation underway.

“I am concerned that instead of merely responding to reasonable changes in the market for natural gas, some providers may have taken the extreme and dangerous weather as an opportunity to charge unconscionably high prices,” Kelly said in her letter.

The Kansas Corporation Commission is investigating some of the natural gas providers but the governor said not all of them are under the jurisdiction of the regulators.

“These entities are, however, subject to the Kansas Consumer Protection Act and your office’s statutory mandate to investigate and prosecute potential violations,” Kelly wrote to the attorney general.

The Kansas City Star reported that Schmidt responded by stating his office had opened an investigation on Feb. 18 and is still attempting to decide if a crime was committed.

“Because of the complexity of the investigation, which deals with numerous entities involved in the production, transportation and distribution of natural gas, and the time that all the entities require to respond to inquiries, this investigation is likely to be time intensive,” Schmidt wrote in response.