Utility gas bills get the attention of consumer groups 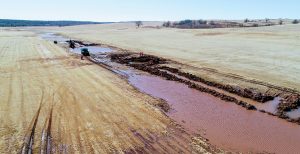 The angry fight between Oklahoma farmers and Cheniere Energy over the construction of its Midship pipeline in the past three years goes before the Federal Energy Regulatory Commission on Thursday.

The full commission is to review the dispute that arose over how Cheniere used eminent domain to acquire farmland for the 200-mile pipeline that carries natural gas from the STACK and SCOOP plays south to the Gulf Coast.

FERC itself has come under fire from the farmers for its lack of action on their complaints that began when the Houston-based company started construction  in the spring of 2019 after the agency approved the project in 2018.

E&E News’ Mike Soraghan reported about the fights this week describing it as “one of the most bitter battles in the country’s pipeline debate,” one filled with lawsuits, threats of violence, accusations of extortion and sabotage.

The energy news organization quoted numerous Oklahoma farmers left embittered over the damage caused by Cheniere and its construction contractor, Strike Inc.  E&E reported the first complaints came within a few months of the start of construction and caused a one-month shut-down ordered by FERC.

Things became so bad that by late last year, the conflict with the landowners turned into a lead exhibit when a U.S. House Oversight and Reform subcommittee held a hearing on FERC’s oversight of construction of pipelines.

The hearing was headlined “Pipelines Over People: How FERC Tramples Landowner Rights in Natural Gas Projects.”

“Our office has heard from several landowners affected by the Midship Pipeline in Oklahoma. In April, FERC granted Midship’s request to put the pipeline into service even though the company still had not repaired damage it had done to private land.
Instead, Midship promised to complete restoration by June 30,” wrote Raskin.
“Four months later, landowners are still waiting for their property to be restored, while Midship has begun operating the pipeline. For some farmers, Midship’s restoration delays have continued over multiple growing seasons and are threatening to drag into next year,” he added.

The Oversight and Reform Committee produced a report that accused FERC of rubber-stamping pipeline projects, granting more than 1,000 certificates while rejecting only 6 in the past 20 years.

The same report found that FERC prevented landowners from defending their property from pipeline companies.