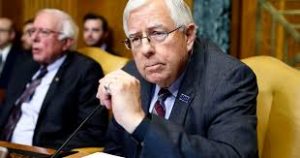 “I’m disappointed in the EPA’s denial of these important small refinery waivers,” Enzi said in a press release from his office reported the Oil City News in Casper.  “The Renewable Fuel Standard program is in many ways a broken system, and exemptions are necessary for our small refineries to compete on a level playing field. This decision could hurt many energy workers in Wyoming and across the country.”
Across the country would include southern Oklahoma, site of the CVR Energy refinery in Wynnewood. CVR Energy is challenging a 10th U.S. Circuit Court of Appeals ruling that went against the exemptions and waivers sought by the company.

“Wheeler announced the agency is denying those petitions, saying that the small refineries did not demonstrate disproportionate economic hardship from compliance with the program,” Enzi’s office said.

Elsewhere, oil-state Sen. Ted Cruz (R-Texas) said the decision, on top of the Justice Department’s decision not to appeal the 10th Circuit ruling, “all but sounded the death knell on the small refinery exemption program and the thousands of blue collar jobs it helped protect.”

“This decision follows President Trump’s promise to promote domestic biofuel production, support our nation’s farmers, and in turn strengthen our energy independence,” EPA Administrator Andrew Wheeler said in a press release. “At the EPA, we are delivering on that promise by following the rule-of-law and ensuring 15 billion gallons are blended into the nation’s fuel supply.”