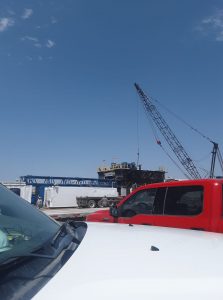 As of mid-week, there are no operating drilling rigs in Wyoming. Zero. Nada. Zilch.

For the first time in 136, the state of Wyoming has no active rigs drilling for oil or gas. The state’s total rig count fell to zero as the last rig was laid down and workers dismantled the operation. It was in Sweetwater County where the Casper Star Tribune said the jolting reminder of the economic devastation of the COVID-19 pandemic was seen and felt.

This marks only the second time the state’s rig count has reached zero since 1884, according to Pete Obermueller, executive director of the Petroleum Association of Wyoming. At the time, Wyoming was still a territory.

The state’s rig count temporarily reached zero on June 26, according to Baker Hughes, but inched back up to one rig the week after.

“It is historic, but not in a great way,” Obermueller said. “There are so many jobs attached to these rigs, and now, people are painfully learning so much revenue is attached too. It’s mind boggling and hard to capture the impact.”

The Petroleum Association of Wyoming estimates one lost rig translates into 100 lost jobs. The state’s Powder River Basin had once been a region targeted by some Oklahoma energy companies. But the COVID-19 pandemic and the plunge in fuel demand sent some of those companies scurrying back home.

Lyle Williams, a candidate for Senate in District 14, posted on social media a picture of the gas rig being laid down on Tuesday.

“Another sad day,” he wrote in the post on Facebook. “Rigging down the last working drilling rig in Wyoming.”

The rig was operated by Wexpro/Dominion and located just south of Rock Springs near the Colorado border, Williams told the Star-Tribune.

But cratering demand for oil during the COVID-19 pandemic, combined with a global price war, has decimated oil and gas producers in the U.S. In April, future prices for oil fell into the negatives for the first time in history.

Though prices have inched back up in the weeks and months since the global price war began, the continued spread of the virus worldwide and uncertainty over another potential glut in supply has plunged several energy firms into insolvency.

The Equality State relies heavily on revenue from oil, gas and other natural resources. The collapse of energy prices, coupled with the onslaught of the pandemic, led state analysts to revise initial revenue forecasts this spring. The state is now facing a $1.5 billion revenue decline.