Quarterly dividend declared by ONE Gas in Tulsa 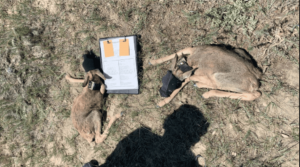 Scientists and researchers have studied the impact of wind farms on birds but now wildlife biologists in Wyoming have undertaken research into the impact on the pronghorn antelope.

The state’s Game and Fish Department recently launched the study by putting GPS tracking collars on 36 pronghorn fawns “in an effort to understand the demographic impacts of wind development on pronghorn populations.”

“Fawns are collared because young animals are more sensitive to disturbance, and fawn survival plays an important role in the performance of pronghorn populations,” Game & Fish said.

Nets were used to capture the fawns. Game & Fish says biologists then measured the size of the fawns and fit them with the GPS collars.

“The collars will expand as the fawns grow, and will be replaced with adult collars in Spring of 2021,” the department added.