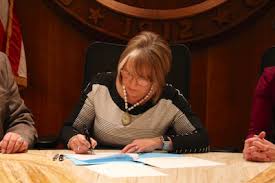 “New Mexico has grave concerns for the unnecessary risk to our citizens and our communities, our first responders, our environment, and to New Mexico’s agriculture and natural resource industries,” the governor wrote in a Tuesday letter reported the Santa Fe New Mexican.

The proposed Holtec International site would store 500 stainless steel canisters of the nation’s spent nuclear fuel on 1,000 acres between Carlsbad and Hobbs, with a full storage capacity of 10,000 canisters.

The proposed project has garnered support from many of southeast New Mexico’s political leaders, who say the facility would bring more jobs to Eddy and Lea counties. But the Holtec site also faces legal challenges from environmental groups.

The governor said it would be “economic malpractice” to store spent nuclear fuel underground in a region that depends on agriculture and oil and gas. She added that a “perceived or actual nuclear incident” could disrupt those industries.

“The proposed (facility) would join the ranks of uranium mining, nuclear energy and defense-related programs that have long created risks to public health and the environment in the state of New Mexico that are disproportionately greater than such risks to the general population of the United States,” she wrote.

Lujan Grisham is allied with New Mexico’s Democratic delegates, some tribes and dozens of activist groups in opposing the storage site, which would hold as much as 173,000 metric tons of high-level radioactive waste, mainly from nuclear reactors.

Earlier this year, the NRC released a draft environmental impact statement for the project, along with a preliminary recommendation that Holtec receive a license to build the facility.

The federal government has yet to secure a permanent site to store nuclear waste.