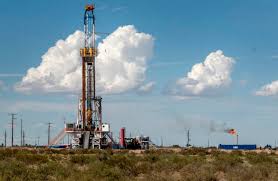 “We’re dependent on an industry that we have no control over,” said State Land Commissioner Stephanie Garcia Richard, who oversees oil and gas leases on state-owned land.

From relishing the thought of a more than $3 billion windfall in oil and gas revenues in February to a nearly $2 billion state budget shortfall by March. It’s the situation in New Mexico where the state’s share of the Permian Basin has gone from oil boom to bust.

It had been a record-breaking year of production in the Permian Basin, one that had state leaders, including Gov. Lujan Grisham gushing about a “moonshot for education.”

“The moonshot was quite frankly a fiasco, given a revenue stream that relies on oil and gas,” said one legislator who was quoted in an extensive story by SearchLight New Mexico, an independent investigative journalism group.