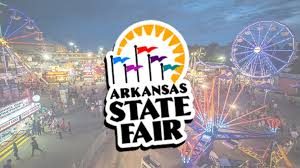 Another state fair has been canceled.  Joining Oklahoma, Texas and Kansas in cancelling their state fairs is Arkansas.

Blame it on the coronavirus pandemic.

“We have been closely monitoring covid-19 data from local, state and federal health officials for the past few months, and we determined that it was in the best interest of the safety of our patrons, staff and our many sponsors to cancel this year’s fair,” general manager Doug White said in an announcement at arkansasstatefair.com.

“We always want to produce the best fair possible for the state of Arkansas and we felt we could not do that with the multitude of restrictions we would have to put in place,” he said according to the Arkansas Democrat-Gazette.

The state fair, which is held annually in Little Rock, was scheduled for Oct. 16-25.

The fair features a midway/carnival, music concerts, a rodeo, commercial exhibits and displays, free shows (from exotic animals to acrobats and magicians), arts and crafts competitions and exhibits, food competitions and demonstrations, and various livestock competitions, according to the Encyclopedia of Arkansas.

“We host well over 400,000 patrons every October and we want every single person to feel safe on our fairgrounds,” said Bruce Maloch, chairman of the board of directors for the Arkansas Livestock Show Association, the organization that produces the annual Arkansas State Fair.

“Given the nature of a normal fair environment, we decided the most responsible decision we could make would be to take this year off and come back bigger and better than ever in 2021,” said Maloch.

While the fair is canceled, the annual livestock show may take place as scheduled.

White said the board voted to cancel this year’s fair while leaving the door open for a possible livestock show during that same 10 days in October.

The coronavirus has caused the cancellation of several state fairs across the country. For many farm kids, state fair livestock shows are highly anticipated events in which they get to show off animals they have raised and cared for.

White said 1,200 animals had already been registered for the youth livestock show.

“We’re extremely disappointed to cancel the 2020 event, but we still have hopes of hosting a junior livestock show in October,” Maloch said in the announcement on the state fair’s website. “If we do work out a plan for a livestock show, of course, we’ll practice all safety protocols including mandatory masks, social distancing and hand-washing stations.”

The current version of the state fair began in 1938, as Arkansas was trying to emerge from the Great Depression, according to the Arkansas encyclopedia. For the first few years, it was held in North Little Rock.

“The economy was in disarray, and the primary cash crop of the state — cotton — was in decline,” C. Dennis Schick wrote in the Arkansas encyclopedia article. “In 1937, a survey by the University of Arkansas Agricultural Cooperative Extension Service revealed that livestock would be successful in the state. A group of leaders, who later formed the Arkansas Livestock Show Association, decided to hold a livestock exposition to educate farmers and to promote the new industry.”

“Only 17,000 people attended, and the show lost $23,000,” wrote Schick. “In 1939, the fair and show were moved back a month, to mid-October, for better weather. In addition to the time change, fair promoters brought in their first celebrity, a young movie star named Roy Rogers. The move worked, leading to celebrities being featured every year since, among them being Western stars such as Gene Autry and musicians such as Johnny Cash.”

The fair was canceled in 1944 and 1945 because of World War II, according to the Arkansas encyclopedia article.