US oil prices hover close to $40 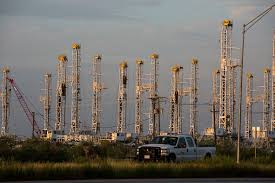 Oklahoma’s rig count dropped to eleven this past week while the nation’s rig count plunged by another 17, leaving only 284 working in the U.S.

Oklahoma’s count had lingered a few weeks on 12 while one year ago, the state had 101 active oil and gas rigs. But permits to drill have been few over the past few months as the oil crisis combined with the coronavirus pandemic struck the energy industry hard.

Take a drive around any oil and gas exploration firm and rigs are stacked side by side in storage, awaiting higher oil prices and new assignments for drilling.

Figures from the Baker Hughes Co. showed Canada has only 21 working rigs this week. In the U.S., the loss this past week included 16 more oil rigs leaving only 206 actively drilling for oil while the number of gas rigs dropped by one to 76.

Oklahoma’s dismal count of eleven compares to the 115 in Texas where the count declined this past week by 12, compared to the 473 last year. Colorado remained at only six and North Dakota stayed at a dozen rigs.

Louisiana’s count dropped by one to 34 while a year ago, the state had 68. New Mexico slipped by three leaving only 58 active rigs, farm below the 101 reported one year earlier.

Wyoming lost one rig, leaving only one rig actively pursuing new energy in the state while a year ago, there were 32 rigs. Kansas was unchanged at only four rigs, according to the Red Top Rig Report published by the Independent Oil and Gas Service Inc. of Wichita.

Of the oil plays, the Permian Basin count dropped by 7 to 141. One year ago, the basin had 446 active rigs.

The Eagle Ford lost another 9 rigs in the past week leaving only 13 drilling for oil and gas. Last year, there were 74.

The Ardmore Woodford count declined by one, leaving only one rig. The Arkoma Wood ford was unchanged at only one rig.

The D-J Basin in Colorado stayed at five rigs while the Granite Wash in Oklahoma and the Texas Panhandle saw its count drop by one, leaving only one rig.

The Mississippian continued with no rigs.