Southeast Kansas to get wind farm 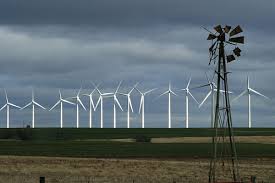 Far Southeast Kansas is about to get a wind farm operation even though some residents are against the project in Crawford and Bourbon Counties near cities such as Pittsburg and Girard.

In discussing the agreements, County Counselor Jim Emerson noted that the project is primarily in Bourbon County, with only 20 or so wind turbines in Crawford County.

Emerson said the project would be a good source of revenue for the county without having to increase taxes, as well as a good revenue source for residents and landowners in the area who will receive payment through leases with the company to allow turbines or other wind energy infrastructure on their land.

He also noted that the county had few options to prevent the project from moving forward, even if it wanted to.

“It’s private owners contracting with a company to put in wind turbines on their property,” Emerson said. The county does not have zoning regulations that govern the area where the project is planned, he said, and therefore it’s role is limited to ensuring the agreements are fair and that the county and its residents are protected.

“Without zoning, there’s not much of a way if any to stop this from moving on,” he said. “We’ve tried at least since I’ve been here as county counselor to put in countywide zoning. Both of those times we’ve had an overflow crowd opposed. So property rights and wanting to keep those private property rights have won the day twice.”

If the county tried to block the project, Emerson said, it would likely lose in court.

“Overwhelmingly they stated that they didn’t want it, they didn’t need it, they’re happy with the way it is,” Moody said.

Commissioner Jeremy Johnson similarly said that, short of zoning, the proposed agreements with Jayhawk Wind were the county government’s best option to have input on the project and to ensure residents benefit from it.

“Because there’s not zoning, they can move forward absent these agreements,” he said. “They could move forward today, right, without us signing off on these and not have those protections in place.”

Emerson said it was correct that much of the planned project could move forward even without the county approving agreements with the developer.

“This will give us legal standing,” Johnson said, “whereas without zoning we have none whatsoever.”

Commissioner Bruce Blair, who made the motion to approve the agreements, similarly said a majority of residents in the area in question, which is a rural area surrounding Hepler, have previously made clear that they are opposed to zoning.

Very few people who live in the immediate area oppose the project, Blair said, noting that one of those few who does recently sent him a letter that was also published in the Morning Sun.

Blair said that the wind farm project being a renewable energy project was a positive aspect of it, and later in the meeting read a comment from another area resident.

“Wind power is clean,” Blair read off the comment card he received, without giving the name of the resident who sent it. “Look at the southeast side of Crawford County. Coal ruined the ground. Oil drilling ruined the ground in Kansas.”

Julianna Pianelli, development manager with Apex Clean Energy, who participated in a conference call with the commissioners at the meeting, also noted that the company had made a variety of community outreach efforts.

As for aesthetic concerns about the wind turbines, Blair noted the project was already moving forward in Bourbon County.