Two months with hardly any rain for Oklahoma Panhandle 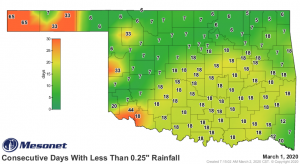 It’s hard to imagine going more than two months with only a few drops of rain but that’s the situation in the western part of Oklahoma’s Panhandle.

State Climatologist Gary McManus reported this week the heaviest rainfalls in the month of February were in southeastern Oklahoma. Amounts ranged from four to six inches with the Mt. Herman Mesonet site recording the highest amount at 6.02 inches.

“The driest area also came as no surprise. The far western Panhandle station of Kenton had the lowest total with 0.26
inches,” wrote McManus.