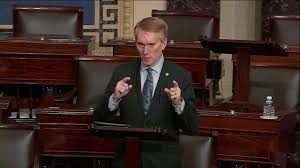 In an emotional speech Wednesday on the Senate floor, Oklahoma U.S. Senator James Lankford again was critical of Democrats for delaying votes on a $2 trillion coronavirus aid package.

“Why in the world are we holding up small businesses and holding up checks to individuals and cutting off support for nonprofits because we’re thinking about a few things like solar panels and carbon neutral foot prints for airlines? Why don’t we get this done? he asked in his floor speech.

He spoke in support of what is now called the Coronavirus Aid, Relief and Economic Security (CARES) Act which he said will provide relief to Oklahoma families, workers and businessses.

“For instance, they really want to make sure that energy companies couldn’t get any support. So they fought hard to be able to make sure there is no additional money for the President buying additional oil to put in the Strategic Petroleum Reserve at this lowest price now. So it will actually cost us more money in the future, but it was their intention to say we don’t want oil companies to get any kind of support in this downturn,” said the Senator.

He noted that Democrats and critics of the package inserted some aspects of the measure to make sure there was great transparency because the didn’t trust the Trump administration.”

“So they built in an inspector general and a whole bunch of additional people to be able to watch the Treasury through the process. And they put in a neat little feature that they demanded and that was that no son or daughter or family member or any individual that works with the presidency, vice presidency and the Congress could get any of not the grant programs, the loan programs,” added the Senator.

“In fact, it was interesting the language they demanded, no son in law could get that. I wonder who that could be targeted towards? A particular son in law that might be there. Literally a lot of this fight that we’ve had over the last three days because they were demanding that there was no way that the President or any of his family could get any kind of loan or benefit from this program at all.

The Senator said three days of delay in the aid package occurred because Democrats wanted to target the President and his family.