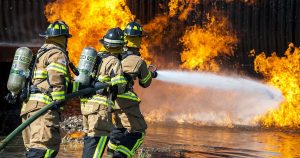 From fire-fighting foam used at Air Force bases in Oklahoma and across the U.S. to sticky notes to the shoes we wear….they involve PFAS chemicals and now have led to criminal investigations involving the EPA.

The Environmental Protection Agency acknowledged the probes in a new progress report on its 2019 PFAS Action Plan. The document says the agency “has multiple criminal investigations underway concerning PFAS-related pollution.”

Per- and polyfluoroalkyl substances are a family of widely used manmade chemicals that have spread through waterways and the environment and raised alarm among regulators and the public. Some types of PFAS have been linked to cancer and other serious health problems.

EPA Administrator Andrew Wheeler told Bloomberg Law the agency is committed to using all its enforcement authorities to address contamination.

“We do use all of our enforcement tools, so if it’s warranted for criminal, we would certainly look to do that,” he said after a National Association of State Department’s of Agriculture event in Arlington, Va.

“Multiple investigations clearly signals EPA is serious about understanding what the manufacturers knew about the chemicals’ toxicity and when they knew it,” said Earth & Water Law Group founder Brent Fewell, an EPA official during the George W. Bush administration. “EPA is likely focused on whether the PFAS manufacturers knowingly failed to disclose to EPA the known risks of the chemical.”

“It’s not at all surprising,” he added, “that EPA has signaled a criminal investigation or even multiple investigations into PFAS given the heightened health concerns and public attention.”

3M Co., which manufactured PFAS, is the target of at least one PFAS-related criminal investigation. The company disclosed in a Jan. 28 financial filing that it received a grand jury subpoena from the U.S. Attorney’s Office for the Northern District of Alabama in December. The subpoena sought documents related to 3M’s potential discharges from a manufacturing site in Decatur, Ala.

The Chemours Co. also disclosed potential criminal proceedings related to PFAS. The company said in a Feb. 14 financial filing that it received notice that the Justice Department is “considering whether to open a criminal investigation” under the Federal Food, Drug, and Cosmetic Act focused on PFAS in food packaging. The filing doesn’t mention EPA involvement.

Fewell noted that the EPA investigates only a couple hundred potential criminal cases per year, and fewer than half are ultimately prosecuted.

3M and DuPont were the original companies developing and producing PFAS, dating to the 1940s. The chemicals have been used by hundreds of companies such as Wolverine World Wide Inc. and W. L. Gore & Associates Inc. to make thousands of products, including semiconductors, sticky notes and shoes.

The original PFAS manufacturers, Chemours, and some companies using the chemicals are the subject of several major PFAS-related lawsuits.